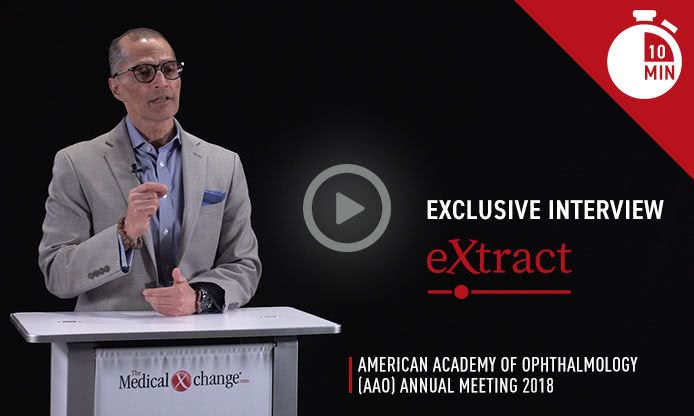 The two phase 3 studies were conducted to test the relative efficacy and safety of brolucizumab, a humanized single-chain antibody fragment that has a high affinity to all VEGF-A isoforms. The single chain structure was engineered specifically for the potential advantages of small molecule inhibition of VEGF, which includes rapid tissue penetration and rapid clearance from the systemic circulation. In both studies, called HAWK and HARRIER, it was compared to aflibercept, an approved nAMD treatment characterized as a VEGF trap.

For an exclusive interview with Dr. Pravin Dugel on the impact to clinical practice, click here

In results presented at this year’s AAO annual meeting, visual acuity at two years was similar in the two treatment groups even though close to half of those randomized to the small molecule inhibitor received intravitreal injections every 12 rather than every eight weeks. Previously reported results from the same studies showed similar results at one year. However, brolucizumab, despite the less frequent dosing, provided greater fluid reduction at all time points as measured with optical coherence tomography (OCT).

The superior drying effect of brolucizumab was also seen in the percentage of patients with fluid, providing significant reductions in sub-retinal pigment epithelium (RPE) fluid, intra-retinal fluid (IRF) and/or sub-retinal fluid (SRF) relative to aflibercept at weeks 48 and 96, as it had at earlier timepoints, in both the HAWK and HARRIER trials (Fig. 1a), (Fig. 1b)).

HAWK and HARRIER were similarly designed non-inferiority trials that compared both the efficacy and safety of brolucizumab to aflibercept in more than 1,800 patients randomized at more than 400 participating centers worldwide. Patients in both the brolucizumab and aflibercept arms underwent a 3-month loading phase. Upon completion, those in the brolucizumab arm were initiated on an every 12-week dosing schedule with the option to move to an every-eight-week schedule if needed. Aflibercept was dosed bi-monthly according to its label.

The primary outcome for both HAWK and HARRIER was non-inferiority for best-corrected visual acuity (BCVA), but these two therapies were also compared for a variety of other clinically important outcomes, including measures of retinal fluid, number of injections, and safety.

While the differences in visual acuity for brolucizumab were non-inferior, it was achieved while the majority of patients (55%) remained on the every-12-week dosing schedule at year one, meaning fewer overall injections and a reduction in the treatment burden, relative to the every-eight-week schedule of aflibercept.

Anatomic Outcomes in HAWK and HARRIER

At week 96, in addition to a lower proportion of patients with presence of retinal fluid, brolucizumab also showed significant decreases in central subfield thickness (CST) relative to aflibercept (P<0.0001) in both the HAWK and HARRIER trials, according to Dr. Dugel (Fig. 3a), (Fig. 3b)).

Favourable changes in anatomic results evaluated through OCT are important for their impact on individualization of treatment. According to Dr. Dugel, clinicians commonly monitor patients with OCT to inform the decision to shorten, maintain, or increase VEGF injection intervals.

The small molecular size of brolucizumab, at 26 kDa, is a fraction of the size of either bevacizumab (150 kDa) or aflibercept (100 kDa), Dr. Dugel reported. He called brolucizumab “the smallest molecule that we have to suppress VEGF-A.” Due to the size, “we know that there is a much higher molar concentration achieved, and it is achieved much faster,” he added.

The findings of HAWK and HARRIER support the value of a small molecule inhibitor of VEGF, according to Dr. Dugel. Based on these data, “we have an agent that is efficient at suppressing a validated target, which is VEGF-A, and we know that through an objective [OCT] measurement,” he said.

No new safety signals were observed in either of the trials with brolucizumab. “Overall safety of brolucizumab was comparable to aflibercept and consistent with published data on other anti-VEGF drugs,” said Dr. Dugel.

While the HAWK and HARRIER studies provided evidence that a small molecule VEGF inhibitor permits every-three-month dosing in a substantial proportion of patients, another study presented at the year’s AAO provided validation for the treat-and-extend strategy. This study, called RIVAL, evaluated the VEGF inhibitors ranibizumab and aflibercept over a two-year period. The primary endpoint of the study associated both treatments with low and comparable rates of macular atrophy when administered in a treat-and-extend approach over two years.

The treat-and-extend approach refers to increasing or decreasing the interval between intravitreal injections depending on disease activity, typically as defined by OCT measures. In North America, surveys suggest that the majority of retina specialists manage nAMD with treat-and extend.

Like the HAWK and HARRIER studies, the 12-month results of RIVAL, which randomized 278 treatment-naïve patients to 0.5 mg ranibizumab or 2.0 mg aflibercept, have been reported previously. As seen at the 12-month interval, there was a trend for better visual acuity measured with BCVA at month 24 of the study in the ranibizumab group (+6.6 vs. +4.6 letters; P=0.11), but there were no significant differences in a variety of measures of macular atrophy.

Other clinically significant measures, such as the number of injections (approximately 17 in both groups over the course of the study) were also similar, according to Dr. Gillies. Although he suggested that it is possible a longer study could show a difference in rates of atrophy, Dr. Gillies called the low rates in this study “reassuring.” He believes that the results support the treat-and-extend approach for reducing the treatment burden of intravitreal therapies.

On the whole, the RIVAL data support results of the CANTREAT study, which were also presented earlier this year at the annual meeting of the American Society of Retina Specialists in Vancouver but were recapped again at the AAO. Despite widespread adoption of treat-and-extend dosing for managing macular degeneration, CANTREAT and now RIVAL have greatly expanded evidence that this approach is appropriate.

“Overwhelmingly in North America we use the treat-and-extend regimen. But there has been remarkably little evidence to support its use,” according to Dr. Peter Kertes, who is Chief of Ophthalmology at Sunnybrook Health Sciences Centre in Toronto, Ontario.

When evaluated after 24 months, visual acuity was similar in the two arms even though this was achieved with a substantially lower rate of injections (17.6 vs. 23.6) in the extend-and-treat arm. Rather than diminish, the mean interval of injection extension increased over time in the CANTREAT treat-and-extend population, climbing from 8.7 at 12 months to 9.3 at 24 months. This was reflected in the proportion of patients at 12 and 24 months with injections extended to at least 8 weeks or to 12 weeks (where the interval was capped) based on the projected next injection interval (Fig. 4)).

The goal of the study was to demonstrate non-inferiority of treat-and-extend to monthly injections, which was achieved, said Dr. Kertes, but he added, “The key is that it was non-inferior [in terms of BCVA] and that it is superior based on the number of injections.”

Dr. Kertes said the recent findings should allow retinal specialists to be more confident in adopting treat-and-extend and increasing the interval of intravitreal injections in the management of nAMD.

What is in the Pipeline for nAMD?

The treatment of nAMD may look different in the future, but “the targeting of VEGF-A will not go away,” Dr. Dugel said. “VEGF-A suppression will remain the mainstay of therapy. I think we will always be suppressing it. It makes sense if we can find a more efficient way to suppress it, which is where brolucizumab comes in.”

The vision for nAMD management in the future may involve more than one therapy that contributes to VEGF suppression, said Dr. Dugel. “Whether we add on a therapy that gives a better result remains to be seen,” he said. “It is very possible. It is what clinicians do in oncology.”

Some exciting prospective candidate therapies, such as RG7716, which binds to and neutralizes VEGF-A and Angiopoietin-2, may ultimately be combined with brolucizumab to treat nAMD. “[RG7716] could be added to [brolucizumab],” postulated Dr. Dugel.

VEGF inhibitors are an effective and standard therapy for nAMD, but there is now strong evidence that monthly injections are not essential to derive benefits. The HAWK and HARRIER study data show that the small molecule VEGF inhibitor brolucizumab can provide similar visual acuity but superior anatomic results over a two-year period relative to aflibercept despite the fact that close to half of patients on brolucizumab were maintained on every-three-month dosing for the entire duration. The RIVAL study data join those of CANTREAT in supporting the viability of the treat-and-extend approach. Both sets of data are relevant to efforts to improve the quality of life of patients with nAMD by reducing the treatment burden.