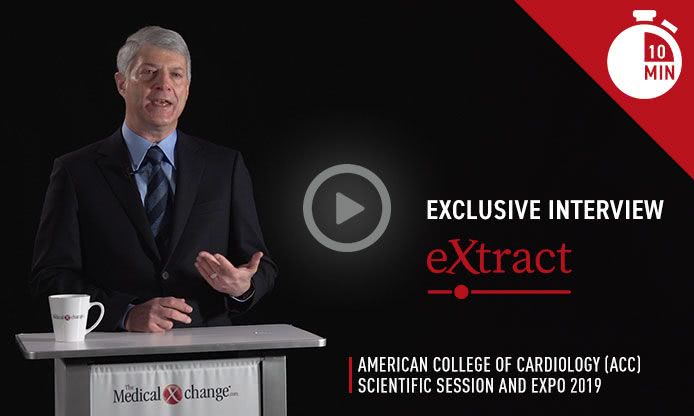 With data from a pre-specified sub-analysis of the DECLARE-TIMI 58 trial published just weeks ago, results associated the SGLT2 inhibitor dapagliflozin with a 17% reduction (HR 0.83; P=0.005) in CV death and hospitalization for heart failure (HF) (Wiviott SD et al. N Engl J Med 2019;380;347-357). The new sub-analysis of DECLARE-TIMI 58 expand the evidence that dapagliflozin is not only safe in high-risk patients but also leads to even greater CV protection.

For an exclusive interview with Dr. Lawrence Leiter on the impact to clinical practice, click here

In the HFrEF population, the relative mortality benefit observed in the sub-analysis was large. On the basis of hazard ratio (HR), there was a 41% reduction in risk of all-cause mortality (HR 0.59) for HFrEF patients for dapagliflozin relative to placebo at the end of follow-up (Figure 1). Based on these data, the number needed to treat to prevent one death over four years was calculated at just 16.

“These benefits were seen with similar safety profile for dapagliflozin regardless of heart failure status.”

“These benefits were seen with similar safety profile for dapagliflozin regardless of HF status,” reported Dr. Eri Toda Kato, Assistant Professor, Kyoto University Graduate School of Medicine, Japan, who presented these data as a Latebreaker session at the ACC meeting. The findings were published simultaneously (Kato et al. Circulation 2019; March 18 [epub ahead of print]).

When compared to those with no history of HF, HFrEF patients were more likely to have established ASCVD (86% vs. 37%), but baseline renal function, HbA1c scores, and proportion with a history of hypertension were similar.

For the primary DECLARE-TIMI 58 endpoint of CV death and hospitalization for HF, the relative risk reduction on dapagliflozin was twice as great in the HFrEF population than the trial population overall (HR 0.62 vs. 0.83). Among those not in HFrEF patients, protection from dapagliflozin moved in the right direction despite a much lower baseline risk (HR 0.88) (Figure 2). Protection from HF hospitalization was significant in both groups (Figure 3).

Based on the mortality benefit, these data “warrant a particular consideration for SGLT2 inhibition in patients with HFrEF,” Dr. Kato reported. However, she also emphasized hospitalizations for HF were reduced across a broad spectrum of T2DM patients “regardless of ejection fraction.”

Protection against MACE in Patients with Prior MI

In the DECLARE-TIMI 58 sub-analysis evaluating outcomes in the 3,584 patients who entered DECLARE-TIMI 58 with a prior MI, the trend for protection against MACE in ASCVD patients reached significance in those with prior MI (Figure 4). MACE was not reduced in the 10,186 patients without history of CV disease. For the endpoint of CV death or hospitalization for HF, dapagliflozin provided protection for those with prior MI, ASCVD, or risk factors alone with similar HR reductions relative to placebo (0.81, 0.87, and 0.84, respectively).

“In patients with T2DM and prior MI, who have an increased risk of CV events, including MACE and hospitalization for HF, dapagliflozin robustly reduced these risks,” reported Dr. Remo H. M. Furtado, Research Fellow, Brigham and Women’s Hospital, Boston, MA. Presented just before the HFrEF latebreaker, the results of this sub-analysis were also published simultaneously (Furtado RHM et al. Circulation 2019; March 18 [epub ahead of print]).

“There appeared to be greater relative protection against MACE for those individuals who had an MI within two years prior to entering DECLARE-TIMI 58.”

When the components of MACE were evaluated, most of the risk reduction was attributed to protection from recurrent MI. Dapagliflozin was associated with numerical but not significant reductions in all-cause death relative to placebo.

“There appeared to be greater relative protection against MACE for those individuals who had an MI within two years prior to entering DECLARE-TIMI 58,” reported Dr. Furtado, who cited a significant interaction for this variable (P=0.007).

Even though the relative reduction in the combined endpoint of CV death or HF hospitalization was similar those with prior MI or ASCVD relative to the overall DECLARE-TIMI 58 study population, Dr. Furtado reported that the absolute risk reductions were greater in both groups due to higher rates of events. Accordingly, and in the context of other observed risk reduction, these results “are relevant to choice of therapy for glycemic control in high-risk patients for whom reducing risk of CV events is an urgent therapeutic goal,” Dr. Furtado said.

Given the potential for the CV protection to be provided by a mechanism other than glycemic control, Dr. Furtado encouraged research to test the effect of SGLT2 inhibitors in patients with a history of HF but without T2DM. He cited experimental studies suggesting potential benefit from SGLT2 inhibition on cardiac remodeling and feedback signaling involving the renin-angiotensin-aldosterone system. The latter mechanism might be relevant to both renal and cardiovascular protection.

A third DECLARE-TIMI 58 sub-analysis presented at the 2019 ACC evaluated the safety of dapagliflozin in the 1025 (6%) patients enrolled with PAD. When compared to the more than 16,000 patients without PAD, rates of MACE, CV death, and HF hospitalizations were approximately twice as great.

“As expected with a higher risk of events, dapagliflozin was associated with a greater absolute reduction in the rates in CV death, HF hospitalizations, and progression of renal disease than seen in those without PAD,” reported Dr. Marc P. Bonaca, Executive Director, CPC Clinical Research, University of Colorado, Aurora.

“In those with PAD relative to those without, dapagliflozin was associated with a greater absolute reduction in the rates in CV death, HF hospitalizations, and progressive renal disease.”

Despite the large absolute risk reductions, the relative reductions in primary endpoint of CV death or HF hospitalization were similar in patients with PAD compared to the overall population (HR 0.86 vs. 0.83, respectively). The reduction in the renal composite outcome, defined in DECLARE-TIMI 58 as a sustained decrease of 40% or more in estimated glomerular filtration rate (eGFR) or new end-stage renal disease, was also similar (HR 0.78 vs. 0.76). Despite a small sample size and wide confidence intervals that prevented risk reductions from reaching statistical significance, Dr. Bonaca said the data underscore other evidence that T2DM patients with PAD are at “heightened risk” for cardiac and renal complications.

Limb-related events were also evaluated in the PAD sub-analysis. Unlike a previous CV safety trial that associated a SGLT2 inhibitor with an increased risk of limb amputations, there was “no consistent pattern of risk or benefit” related to a list of evaluated limb events that included ischemia, amputations, and revascularizations, according to Dr. Bonaca.

The DECLARE-TIMI 58 and other SGLT2 safety trials were launched to fulfill an FDA requirement to demonstrate CV safety. Instead, these trials have associated SGLT2 inhibitors with clinically significant CV risk reductions. In addition, DECLARE-TIMI 58, which is the largest CV safety trial conducted with any antidiabetic therapy, associated dapagliflozin with a significant reduction in a composite of adverse renal outcomes. With new sub-analysis data documenting additional risk reductions in high-risk groups, SGLT2 inhibition is now associated with favorable activity on each of the systems implicated in adverse CV outcomes in T2DM patients (Table 1).

“There appears to be a benefit for HF reduction across a broad spectrum of patients with and without HF, suggesting that the use of these agents could be beneficial in a very large population of patients with diabetes,” Dr. Kato said.

The recently completed sub-analyses of the DECLARE-TIMI 58 study have reinforced the previously published findings. In addition to the reduction in CV mortality and HF hospitalizations observed in both those with established CV disease and risk factors alone, an all-cause mortality benefit was observed in patients in HFrEF and reductions in MACE were observed in patients with prior MI. While these sub-analyses show even greater benefit in those at highest risk for CV disease, they emphasize the value of SGLT2 inhibition as a strategy for modifying CV risk independent of glycemic control.