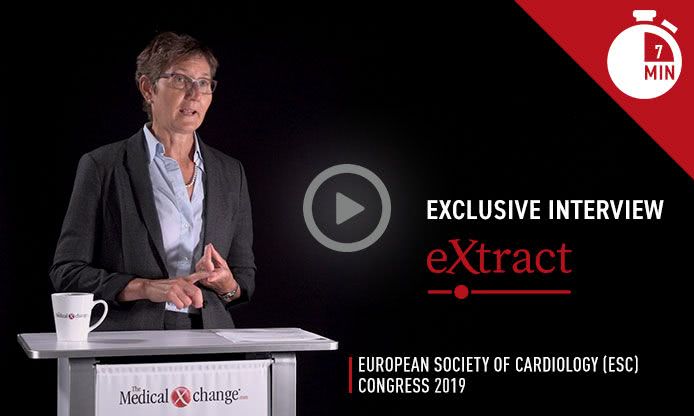 On the basis of results from the PARADIGM-HF trial, sacubitril-valsartan is already a guideline-recommended therapy for heart failure with reduced ejection fraction (HFrEF). In-hospital initiation of sacubitril-valsartan in HFrEF was subsequently found in PIONEER-HF to improve post-discharge outcomes. Presented at this year’s ESC, the latest trial, PARAGON-HF, was testing whether sacubitril-valsartan prevents total (first and recurrent) hospitalizations for heart failure and death from cardiovascular (CV) causes in HFpEF, a condition for which there is no approved therapy. The primary endpoint was just missed, but the lead investigator and other experts believe subgroup benefits are instructive, potentially revising how HFpEF is defined.

For an exclusive interview with Dr. Anique Ducharme on the impact to clinical practice, click here

In PARAGON-HF, which was published simultaneously with the ESC presentation (Solomon SD et al. N Engl J Med 2019, epub Sept 1, 2019), 4822 patients with HFpEF defined, amongst other criteria, by a left ventricular ejection fraction (LVEF) of ≥45%, were randomized to sacubitril-valsartan or valsartan. After a median follow-up of 35 months, the primary outcome of total hospitalizations for heart failure and death from CV causes was reduced 13% (HR 0.87; 95% CI 0.75–1.01) by sacubitril-valsartan relative to valsartan, a difference just short of significance (P=0.059).

“Just seven events in a trial of almost five thousand patients could have flipped the result of PARAGON-HF.”

“This is the definition of a borderline outcome,” said the principal investigator Dr. Scott Solomon, Brigham and Women’s Hospital, Boston. “Just seven events in a trial of almost five thousand patients could have flipped the result.”

The issue is not the treatment but likely the definition of HFpEF. Subgroup analyses from PARAGON-HF re-emphasize the fact that worsening LV function occurs on a continuum. Those on sacubitril-valsartan at or below the LVEF mean of 57% had a 22% reduction (HR 0.78; P=0.03) in the primary endpoint, which was significant, relative to valsartan (Figure 1). These findings emphasize the continuum of LVEF risk.

“The findings from PARAGON-HF suggest that some patients with ejection fractions below normal but not at the current definition of HFpEF may benefit from sacubitril-valsartan,” Dr. Solomon said. He added, “It has been previously observed that HFpEF is phenotypically heterogeneous, but I think these data suggest it is therapeutically heterogeneous as well.”

“The findings from PARAGON-HF suggest that some patients with ejection fractions below normal but not at the current definition of HFpEF may benefit from [treatment].”

HFpEF trials have variably used LVEF >40% or >45% to select patients for inclusion, but Dr. Solomon pointed out that this number creates an arbitrary yes-no category for HFpEF that might not be useful or clinically relevant. Prior HFpEF trials, including TOPCAT and CHARM-Preserved, did indeed show benefits extended to patients in the mid-range LVEF group. The comments of the ESC-invited discussant for the PARAGON-HF trial, Dr. Stuart Connolly, Director of the Division of Cardiology, McMaster University, Hamilton, Ontario, were supportive.

Specifically, Dr. Connolly called the increasing benefit of sacubitril-valsartan in patients with lower LVEF “compelling” and “biologically plausible.” He also said that the relative protection against heart failure hospitalization in PARAGON-HF is “consistent with the effect observed in HFrEF” previously reported in PARADIGM-HF.

Other data from PARAGON-HF also associated sacubitril-valsartan with protection against heart failure progression. This included a 50% reduction (HR 0.50) in a renal composite outcome of end-stage renal disease, renal failure, or ≥50% decrease in estimated glomerular filtration rate (eGFR) from baseline (Table 1). Among those randomized to sacubitril-valsartan, the likelihood of improvement in New York Heart Association (NYHA) functional class was increased by 45% (OR 1.45).

Women randomized to sacubitril-valsartan had a 27% relative reduction (RR 0.73) in the risk of the primary outcome of total heart failure hospitalization or CV death than women who received valsartan alone. In a study that missed its primary endpoint, this, like other subgroup and secondary outcome analyses, are considered exploratory findings, but Dr. Solomon said it might be particularly important for understanding HFpEF. Women are overrepresented in this group and, compared to men, have more events. Appropriately, women represented 52% of the population enrolled in PARAGON-HF.

Despite multiple trials, HFpEF is “a disease with no evidence-based therapy” for which “there is a huge unmet need,” according to Dr. Solomon. PARAGON-HF might have jeopardized its opportunity to be the first to associate a therapy with a statistically significant benefit in this population by employing an active comparator rather than placebo. Although no angiotensin receptor blocker is indicated for HFpEF, agents in this class are known to be active, which Dr. Solomon said might explain the smaller than anticipated differences between study arms in PARAGON-HF.

Based on the benefit observed in patients with low LVEF, PARAGON-HF provides evidence that at least some HFpEF patients have transitioned to a progressive disease process amenable to therapies effective in HFrEF. New multicenter trials with sacubitril-valsartan in HFrEF, also presented at the 2019 ESC meeting, support the premise that disease progression in HFrEF can be attenuated with sacubitril-valsartan. Previous studies show that sacubitril, by inhibiting neprilysin, reduces NT-proBNP, but these data extend evidence that NT-proBNP leads to adverse cardiac remodeling.

These two multicenter clinical trials, EVALUATE-HF and PROVE-HF, had different designs but generated compatible data. In the double-blind EVALUATE-HF trial, 464 patients with HFrEF (LVEF ≤40%) were randomized to sacubitril-valsartan or enalapril and evaluated over 12 weeks. The primary outcome was change in aortic compliance, a determinant of ventricular load and cardiac performance, but other changes relevant to hemodynamics evaluated in the context of clinical changes provided a broad opportunity to track effects.

Benefits on Measures of Cardiac Remodeling

Ultimately, the difference in aortic stiffness, which was reduced among those randomized to sacubitril-valsartan but increased in enalapril group, did not reach statistical significance, but sacubitril-valsartan was associated with significant reductions in numerous measures suggestive of cardiac remodeling, including left atrial volume index (LAVI) and both left ventricular end-systolic (LVESVI) and end-diastolic volume indices (LVEDVI) (Figure 2). All of these changes correlated with reductions in NT-proBNP.

“The drug exposure in the two arms was limited to 12 weeks because a longer trial was considered unethical,” reported Dr. Akshay S. Desai, Director of the Heart Failure Disease Management Program, Brigham and Women’s Hospital, Boston. Yet, within this time frame, the changes associated with sacubitril-valsartan relative to enalapril were consistent with “a favorable impact on cardiac remodeling.”

Perhaps most compelling, the improvements at 12 weeks in hemodynamics were not only correlated with a significantly greater reduction in NT-proBNP among those randomized to sacubitril-valsartan than enalapril (-37% vs. -5%; P<0.001), but a significantly greater reduction in heart failure symptoms (P=0.002) as measured by the Kansas City Cardiomyopathy Questionnaire (KCCQ). There were also early and sustained reductions in cardiac biomarkers of wall stress and injury similar to those reported in PARADIGM-HF.

Although LVEF ≤40% was enrollment criterion for this study, “the observed changes were seen in a population without advanced cardiac remodeling at baseline,” Dr. Desai reported. The correlation between the reduction in NT-proBNP and the favorable changes in cardiac remodeling in patients on sacubitril-valsartan support this as a mechanism of action, but Dr. Desai was impressed by the correlation of both with KCCQ, which climbed 4.5 points higher on average by 12 weeks in those randomized to sacubitril-valsartan relative to enalapril.

A second study with a different design, called PROVE-HF, produced a similar conclusion. Both EVALUATE-HF (Desai AS et al.) and PROVE-HF (Januzzi JL et al.) were published simultaneously with their presentations at ESC in JAMA (2019; epub September 2).

PROVE-HF was a 12-month open-label study with sacubitril-valsartan in HFrEF. Like EVALUATE-HF, PROVE-HF was designed to explore the hypothesis that reductions in NT-proBNP in patients on sacubitril-valsartan are correlated with attenuation of cardiac remodeling and may explain the clinical benefits observed in PARADIGM-HF. In a study evaluating a proven therapy, randomization was considered unethical for a 12-month study.

NT-pro-BNP Levels Reduced by Half

In PROVE-HF, 794 HFrEF patients were enrolled. Relative to a baseline median concentration of 816 pg/mL, the NT-proBNP concentrations at the end of 12 months of sacubitril treatment were nearly 50% lower (455 pg/mL; P<0.001). As in EVALUATE-HF, this reduction was significantly correlated with favorable changes in cardiac structure, including LVEF, LVEDVI, LVESVI, and LAVI (Table 2).

“This correlation between a reduction in NT-proBNP and evidence of reverse cardiac remodeling provide a mechanistic explanation for the effects of sacubitril-valsartan in patients with HFrEF,” reported Dr. James L. Januzzi, Jr., Director, Barry Fellowship in Cardiovascular Research, Massachusetts General Hospital, Boston.

One of the features of this study was the inclusion of patients not eligible for PARADIGM-HF, including those with new-onset heart failure and those who were not taking a renin-angiotensin system inhibitor prior to treatment with sacubitril-valsartan. Correlations between reductions in NT-proBNP and cardiac reverse remodeling were similar in these groups as in the study population as a whole, noted Dr. Januzzi.

While the EVALUATE-HF and PROVE-HF studies extend the clinical evidence that NT-proBNP is not just a biomarker but a targetable driver of HFrEF, PARAGON-HF has produced data that appears to challenge how HFrEF and HFpEF are best defined. Rather than different clinical entities, these might be best understood on a continuum in regard to pathophysiology, which has important implications for interventions designed to prevent progression.

The greater reduction in total hospitalizations for heart failure and CV death in those treated with sacubitril-valsartan rather than valsartan in the PARAGON-HF trial fell short of statistical significance. However, the data might provide a challenge to the definition of HFpEF as it now stands. In subgroup analysis, significant benefit was observed in patients with LVEF ≤57% and increasing benefit was observed at a lower LVEF. If reducing NT-proBNP is important to inhibit the cardiac remodeling that characterizes progressive heart failure, as suggested in EVALUATE-HF and PROVE-HF, the benefit of sacubitril-valsartan in HFrEF might extend to some patients with HFpEF whose disease has advanced.

• In PARAGON-HF, which randomized HFpEF patients to sacubitril-valsartan or valsartan alone, the greater reduction in the primary endpoint of total hospitalizations and CV death for the experimental arm narrowly missed statistical significance (P=0.059).

• In subgroup analysis, there was a significant advantage for sacubitril-valsartan in patients with LVEF ≤57% that increased among those with even lower LVEF but still ≥45%.

• Other observed benefits with sacubitril-valsartan included a 50% reduction in risk of an adverse renal composite outcome and an improvement in NYHA functional class.

• New data in HFrEF that associate reductions in NT-proBNP on sacubitril-valsartan with inhibition of cardiac remodeling appears likely to explain benefits in previous trials such as PARADIGM-HF.

• These mechanistic data might be relevant for those with HFpEF who have reached a degree of progression where elevated NT-proBNP predicts increased risk of events.