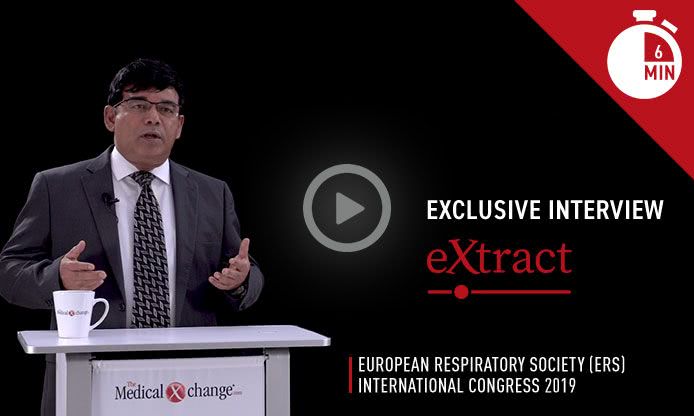 “Of about 6000 patients with severe asthma who are candidates for biologic treatment, which is approximately 1.5% of the whole asthma patient population, less than half are currently receiving it,” reported Dr. Katrien Eger, Amsterdam University Medical Center, the Netherlands.

“Of patients with severe asthma who are candidates for biologic treatment [by requiring oral corticosteroids despite optimal first-line treatment], less than half are currently receiving it.”

These figures were extrapolated from the asthma population in the Netherlands, but the underuse of biologics is potentially worse in other countries. Almost 15 years after the first biologic, omalizumab, was approved for reducing exacerbations in patients uncontrolled on high doses of inhaled corticosteroids (ICS) and a second controller, many physicians are still failing to offer these therapies when indicated.

For an exclusive interview with Dr. Warren Ramesh on the impact to clinical practice, click here

No Obstacle to Biologics in the Netherlands

“In the Netherlands, we have very good access to healthcare, and biologics are available to anyone who needs them,” said Dr. Eger, explaining that these agents remain underused despite the absence of obstacles.

In the Dutch study, which drew on findings from a pharmacy database, 29% of patients on high doses of ICS were also found to be taking harmful doses of oral corticosteroids, defined as a cumulative annual dose of 420 mg or more, or a prednisone-equivalent. The median annual exposure in this group was 750 mg.

In a subsequent analysis, 78% of the patients exposed to harmful doses of oral corticosteroids were found inadequately adherent to their prescribed ICS or were using their inhaler incorrectly. However, the data also showed that of the 21.9% who were adherent and still uncontrolled, only 46.1% were on a biologic, which are indicated for this population in part due to their steroid-sparing effects, according to Dr. Eger (Figure 1).

According to Dr. Eger, the inadequate use of biologics represents an important missed opportunity to lower patient risks. Rather than reserving these agents for the most challenging patients, Dr. Eger indicated that biologics should be used before patients face systemic complications, such as adrenal insufficiency and bone loss, which she said begin to emerge when the cumulative lifetime exposure exceeds a prednisone-equivalent dose of 500 mg.

“We demonstrated the efficacy of omalizumab in severe allergic asthma regardless of blood eosinophil level.”

The inadequate use of biologics persists despite level-one evidence that they are effective and well tolerated. In the case of omalizumab, this evidence was joined at the 2019 ERS International Congress by a series of real-world studies, confirming the benefits observed in pivotal trials, such as a reduction in risk of exacerbations, but also showing significant improvements in quality of life (QoL). Although there are no large-scale randomized comparisons of the available biologics, which now include anti-IL5 drugs, such as mepolizumab and benralizumab, and the anti-IL4 antibody dupilumab, blood eosinophilia is not a prerequisite for omalizumab efficacy.

Consistent with the primary results of STELLAIR, the new analysis supported the conclusion that omalizumab is effective across severe asthma allergic phenotypes. In this study, efficacy was evaluated in patients with (>2) or without (<2) multiple allergic comorbidities (MAC), such as atopic dermatitis, food allergies, other allergic sensitizations, or allergic rhinitis. The study found that patients without such comorbidities also improved on the basis of physician assessment and in regard to protection from exacerbations.

“In patients who had MAC relative to those without MAC, the response to omalizumab was more pronounced, but both groups benefited,” Dr. Just reported.

MAC defines an important phenotype of type 2, or inflammatory, asthma for which biologics are indicated. In the STELLAIR population of 872 children and adults with severe allergic asthma, 47.5% of those six to 17 years of age fit this phenotype. MAC was less common in adults, observed in only 13.9% of those 18 years of age or older, but this new STELLAIR sub analysis extends the evidence that omalizumab is versatile without requirement for biomarkers, such as elevated eosinophils, for patient selection.

In STELLAIR, benefit was defined by a greater than 40% reduction in risk of exacerbations, significant improvement in the physician assessment of the Global Evaluation of Treatment Effectiveness (GETE), or both. In those with MAC, the response rate was 81.6% by physician-assessed GETE, 83.8% by exacerbation decline, and 73.5% by both. In those without MAC, these response rates were 66.6%, 70.2%, and 57.3%, respectively (Figure 2).

The previously published data showing efficacy of omalizumab in those with low or high blood eosinophil levels, stratified by ≥300 cells/μL, provided important new information. The activity of the anti-IL5 agents has been shown to be dependent on elevated blood eosinophil levels, making this a biomarker relevant for patient selection. Pivotal trials with omalizumab, available in Canada since 2005, were conducted before the introduction of anti-IL5 monoclonal antibodies and the focus on eosinophils as a clinical indicator of one type of inflammatory asthma. The STELLAIR study showed that eosinophilia is not an appropriate criterion for selecting candidates for omalizumab.

The extensive clinical experience with omalizumab has permitted a large body of real-world data to test the practical value of omalizumab in routine care. At the 2019 ERS International Congress, a series of independent studies not only confirmed the efficacy of omalizumab in severe allergic asthma for clinically-meaningful objective endpoints, such as reduction in oral corticosteroid exposure and protection against exacerbations, but consistently demonstrated improvements in QoL, an important measure for a chronic disease. The QoL data provide a particularly compelling rationale for offering treatment to prevent rather than treat steroid dependency.

Data Based on Meta-Analysis of 85 Studies

One set of data was generated by a meta-analysis of 85 observational studies and registries. Collected between 2005 and the end of 2018, the data provided the basis for two assessments. In one, the investigators evaluated the impact of omalizumab on oral corticosteroid use in the context of exacerbations. In the other, the primary focus was on change in QoL. Many of the studies included in the meta-analysis had data extending out to 12 months or longer, which provides clinical relevance not permitted in randomized trials of more limited duration.

The 85 studies were drawn from a review of more than 2000 publications. The studies were eligible for inclusion in the meta-analysis if they enrolled patients six years of age or older with severe and persistent allergic asthma for whom there was a minimum of 12 months of clinical data prior to initiating omalizumab. Studies were also required to have data on at least one of the following outcomes: oral corticosteroid exposure, rate of exacerbations, GETE physician assessment, asthma symptom control as measured with the Asthma Control Test (ACT), lung function, and QoL as measured with the Asthma Quality-of-Life Questionnaire (AQLQ). The changes in these measures after initiating omalizumab were compared to the 12-month period prior to this treatment.

“Treatment with omalizumab was associated with a mean reduction in the daily dose of oral corticosteroids of 6.64 mg/day, 5.45 mg/day, 14.08 mg/day at 16 weeks, 12 months, and end of study, respectively,” reported Dr. Marc Humbert, Professor of Respiratory Medicine, Université de Paris-Sud, France.

This reduction in oral corticosteroids was accompanied by reductions in the rate of severe asthma exacerbations, which, like the decrease in oral corticosteroid exposure, suggested a modest incremental improvement over the period of treatment. Relative to the period prior to initiating omalizumab, the mean difference in the number of severe asthma exacerbations was 2.13 lower at 16 weeks, 2.75 lower at 12 months, and 3.28 lower at end of study (all P<0.001).

In the second analysis of the same set of studies, the outcomes of interest were asthma control and QoL. Consistent with the controlled trials, ACT scores significantly improved from baseline at 16 weeks, 6 months, 12 months, and the end of study (all P<0.01). The proportion of patients judged to have achieved a good or excellent response by GETE physician assessment was 77% at 16 weeks, 76% at six months, and 82% at 12 months, according to Dr. Peter Gibson, Priority Research Centre for Asthma and Respiratory Disease, the University of Newcastle, Australia.

A co-author with Dr. Humbert on both evaluations of the 85-study meta-analysis, Dr. Gibson reported these clinical improvements were reflected in the patient experience. Overall, “91% of the patients achieved clinically-meaningful improvement in the AQLQ score by the end of study,” he stated, defining this as an increase of at least 0.5 points on this scale. In fact, the mean differences from baseline were 1.14, 1.16, 1.52, and 1.57 at week 16, month 6, month 12, and the end of study (all P<0.01), respectively (Figure 4).

“Ninety-one percent of the patients achieved clinically-meaningful improvement in the AQLQ score by the end of study.”

For asthma treatment, the biologics are indicated for persistent cases of allergic type 2 inflammatory asthma, but their role differs for phenotypes within this indication. The anti-IL5 monoclonal antibodies are recommended for the eosinophilic phenotype, typically identified by blood eosinophilia. The more recently approved anti-IL4 monoclonal antibody dupilumab is indicated either for the eosinophilic phenotype, or for corticosteroid-dependent asthma. Although omalizumab is indicated for moderate-to-severe allergic asthma as defined by a positive skin test or reactivity to a perennial aeroallergen, another set of real-world data from Spain, called the FENOMA study, challenged this restriction.

In an evaluation of medical records of 345 patients with asthma treated with omalizumab, the 80 patients (23.2%) with a negative skin test, relative to those with allergic asthma, also achieved reductions in exacerbation rates from baseline (-5.6 vs. -10.0) and also achieved improvements in lung function as measured with FEV1 (+16.5% vs. +14.0%). According to Dr. A. Mardones Charroalade, Hospital Universitario Basurto, Bilbao, Spain, these data suggest efficacy from omalizumab “even in patients in whom no underlying allergic mechanism could be proven.”

These data do not imply that omalizumab is effective in patients with severe asthma regardless of phenotype, but they do suggest benefit across a broad array of patients with inflammatory asthma who are not controlled on conventional first-line therapies.

Biologics play an important role in the small but important proportion of patients with symptoms not adequately controlled with first-line therapies. The evidence that they remain underutilized in patients exposed to excess oral corticosteroids is surprising in the context of extensive evidence of safety and efficacy. New data presented here have shown that of available biologics, omalizumab, which was approved first, demonstrates efficacy in allergic phenotypes independent of eosinophil count. For extended disease control, sustained improvements in QoL over 12 months or longer confirm a relevant clinical impact.