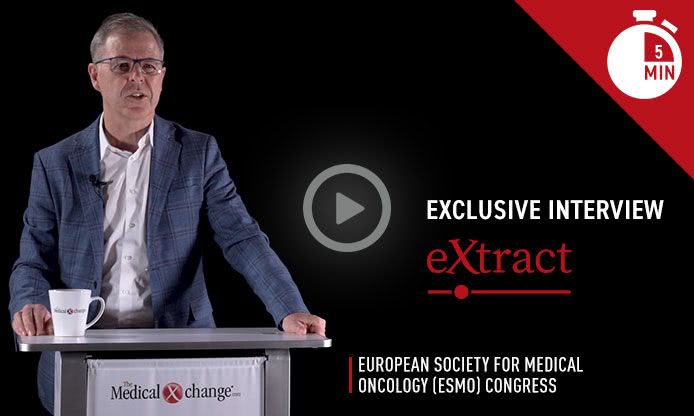 At the 2019 ESMO Congress, the OS results of the FLAURA trial were delivered during the Presidential Symposium, a session largely devoted to practice-changing studies. In the trial, 556 patients with previously untreated EGFR mutation-positive NSCLC were randomized to the third-generation osimertinib or to receive either of the early-generation TKIs gefitinib or erlotinib. With follow-up of more than three years, the median survival was 6.8 months longer among those assigned to osimertinib (38.6 vs. 31.8 months), translating into an OS hazard ratio of 0.799 (P=0.0462) (Figure 1).

For an exclusive interview with Dr. Glenwood Goss on the impact to clinical practice, click here

“This is a difference that is both statistically and clinically meaningful,” asserted Dr. Suresh S. Ramalingam, Winthrop Cancer Center, Emory University, Atlanta, Georgia. He noted that FLAURA is the first trial to show an OS advantage for one TKI over another in EGFR-mutation NSCLC.

“This difference in overall survival is both statistically and clinically meaningful.”

Due to the clinical importance of PFS in a rapidly-progressive disease, osimertinib had already become the preferred TKI at many centers, but Dr. Ramalingam said the OS data “reinforce osimertinib as the standard first-line therapy in EGFR mutation-positive NSCLC.”

The relative advantage of osimertinib was achieved even though it was significantly better tolerated than the earlier-generation TKIs. This included lower rates of skin rash (58% vs. 78%) and stomatitis (29% vs. 20%). More importantly, it also included a lower rate of grade 3 or higher adverse events (30% vs. 37%). The increased tolerability of the third-generation TKI is attributed to its greater selectivity for target EGFR-TKI-sensitizing mutations than wild-type EGFR, according to Dr. Ramalingam.

Most importantly, the results of the FLAURA trial provide evidence that sequencing of TKIs in EGFR mutation-positive NSCLC is inappropriate. Although osimertinib is effective in those who progress on an early-generation TKI, roughly 30% of patients randomized to either arm in FLAURA never received a second therapy (Figure 2).  This is one reason to initiate therapy with the more effective agent.

Of osimertinib patients who went on to a second-line therapy, most received a cytotoxic chemotherapy or TKI tailored to the molecular profile of the cancer. Of the 65% patients who went onto a second-line therapy in the group initially randomized to an earlier-generation TKI, about half received osimertinib, but the remaining also received cytotoxic therapy or treatment with palliative intent. Importantly, 22% of those randomized to osimertinib remained controlled and on therapy at the most recent follow-up versus only 5% of those randomized to a comparator EGFR-TKI.

Best Drug Should Be Used First

“These data show you that you should use the best drug first,” said the ESMO-invited discussant Dr. Pasi A. Jänne, Director, Lowe Center for Thoracic Oncology, Dana-Farber Cancer Center, Harvard Medical School, Boston, Massachusetts. He maintained that FLAURA has demonstrated that TKI sequencing is not an appropriate strategy.

“For many patients, the first therapy is the only shot at disease control.”

“For many patients, the first therapy is the only shot at disease control,” agreed Dr. Ramalingam. Unlike many cancer trials in which crossover commonly prevents a more active therapy from ever demonstrating an OS advantage, the FLAURA trial provides the proof that patients started on the less effective therapy do not catch up when eventually switched.

In addition to the higher degree of selectivity for the mutated EGFR receptor, osimertinib inhibits the EGFR T790 resistance mutation, which is a major cause of failure in earlier generation EGFR-TKIs. Activity against this mutation is a major factor in the efficacy of osimertinib after other agents fail. Furthermore, this third-generation agent, unlike earlier-generation TKIs, achieves substantial penetration of the blood brain barrier, offering efficacy against brain metastases, a common reason for disease progression in EGFR mutation-positive NSCLC. In the FLAURA trial, approximately 20% of patients had brain metastases at study entry.

In FLAURA, the OS advantage was consistent at least numerically across all subgroups, such as those with or without an EGFR mutation at entry, those with or without brain metastases, and those with or without a history of smoking. The hazard ratio for Asians (0.995) was narrow relative to non-Asians, in whom there was a greater than 45% reduction in risk of death (HR 0.542), but survival curves favored osimertinib over earlier-generation TKIs out to 36 months.

The results of the FLAURA trial have established a new treatment standard in EGFR mutation-positive NSCLC. The study establishes that osimertinib, already recognized as the most potent TKI for this disease, should be used first. This agent not only extends survival relative to sequencing of TKIs, but it is better tolerated than earlier-generation agents. Three years after randomization, nearly 30% of osimertinib patients remain on study therapy, an unprecedented proportion in a challenging disease.