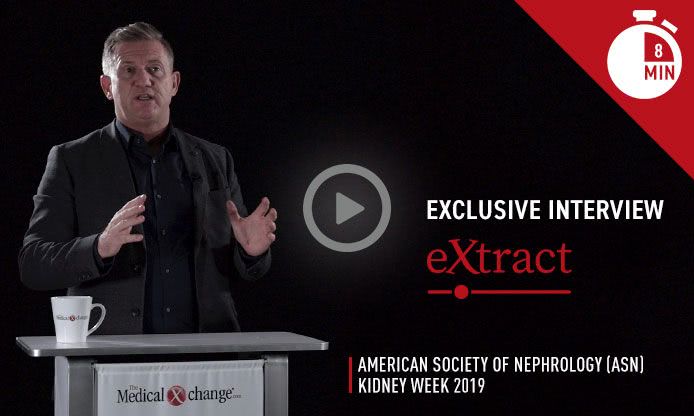 The study agent, roxadustat, is one of several HIF prolyl hydroxylase inhibitors in development, but it is the first to complete global phase 3 trials. The results in both the comparator and placebo-controlled trials suggest this oral agent is a breakthrough. The pooled CV safety analyses showed that roxadustat did not increase the risk of major adverse cardiovascular events (MACE), MACE+ and all-cause mortality in non-dialysis-dependent (NDD) patients compared to placebo and dialysis-dependent (DD) patients compared to epoetin alfa. High relative reductions from baseline in hepcidin and ferritin corroborate other evidence that this drug supports fundamental physiologic responses to hypoxia.

For an exclusive interview with Dr. Andrew Steele on the impact to clinical practice, click here

In one of the direct comparator trials, called HIMALAYAS, which was designed as a non-inferiority trial, “roxadustat was not inferior but, indeed, superior to epoetin alfa in regard to the primary endpoint of change in Hb [from baseline],” reported the principal investigator, Dr. Robert Provenzano, Director of Acute Dialysis Services, St. John Hospital and Medical Center, Detroit, Michigan.

“Roxadustat was not inferior but, indeed, superior to epoetin alfa in regard to the primary endpoint of change in hemoglobin.”

In this trial, 1043 anemic patients who had recently started dialysis (end-stage renal disease (ESRD) receiving dialysis for 2 weeks to ≤4 months) were randomized. Two different non-inferiority endpoints were employed for patients randomized in the U.S. and those randomized in Europe. While the European primary endpoint focused on proportion achieving an Hb response during the first 24 weeks, the U.S. primary endpoint focused on mean change from baseline in Hb between weeks 28 and 52.

For the U.S. endpoint, the advantage for roxadustat exceeded the prespecified margin for non-inferiority, permitting an evaluation for superiority, which proved to be statistically significant (P=0.0005) (Figure 1).  For the European endpoint, which was the proportion of patients achieving an Hb response at two consecutive visits during the first 24 weeks, roxadustat showed non-inferiority to ESA (88.2% vs. 84.4%).

While ESA drugs stimulate red blood cell production in the bone marrow, HIF prolyl hydroxylase inhibitors are designed to stimulate transcriptional activity mediated by HIF. By inhibiting prolyl hydroxylase, which is an enzyme that sets up HIF-α for degradation, these new agents mimic the body’s natural response to low oxygen leading to coordinated erythropoiesis and iron mobilization.

“This is an extremely physiological approach as opposed to a pharmacological approach to anemia,” explained Dr. Provenzano, who cited work awarded the 2019 Nobel Prize in Physiology or Medicine for the advances that allowed this therapy to move from bench to bedside.

In the HIMALAYAS trial, roxadustat was non-inferior to epoetin alfa among patients who were iron depleted, and treatment required less IV iron (P=0.00028).

The HIMALAYAS trial enrolled patients with incident dialysis, defined as initiating dialysis more than two weeks but less than four months before enrollment. Other phase 3 trials in the roxadustat program have examined efficacy in other populations. In a second active comparator trial, called ROCKIES, 2133 DD patients with anemia were randomized to roxadustat or epoetin alfa. Patients were required to have been on dialysis (hemo- or peritoneal) ≥2 weeks, and most were already taking an ESA prior to randomization.

For the ROCKIES primary, efficacy endpoint of Hb change from baseline to average Hb in weeks 28-52, the advantage for roxadustat over epoetin alfa reached statistical significance (0.77 vs. 0.68 g/dL; P=0.036). Despite elevated C-reactive protein (CRP), there was a greater increase in Hb with roxadustat vs ESA (0.80 vs. 0.59; P=0.012).

“Historically, patients with systemic inflammation have been relatively difficult to treat with epo [ESA] drugs, and the greater increase in Hb among these patients, which was a prespecified endpoint, suggests a difference in effect,” reported the principal investigator, Dr. Steven Fishbane, Chief, Division of Kidney Disease and Hypertension, Northwell Health, Manhasset, New York.

As in the HIMALAYAS trial, the roxadustat group required significantly less monthly IV iron  (Figure 2). Other measures favoring roxadustat over epoetin alfa in the ROCKIES trial included significant reductions (P<0.001) in hepcidin, which inhibits iron transport, and ferritin, which promotes iron storage (Figure 3). These data support the premise that HIF prolyl hydroxylase inhibition promotes a physiological response to hypoxia that extends beyond erythropoiesis alone, according to Dr. Fishbane.

“For hepcidin levels, which is the master regulator of iron status and something that is altered by HIF prolyl hydroxylase inhibitors, roxadustat shows a very satisfying decrease relative to a much smaller reduction in the group receiving epo [ESA],” Dr. Fishbane said.

“The advantage was seen early on and was maintained through the end of the course of study.”

Despite the evidence that different pathophysiologic factors appear to drive anemia at early versus late stages of CKD or in dialysis-incident versus dialysis prevalent patients, the relative advantages of roxadustat in the ROCKIES trial closely mimicked what was observed in the HIMALAYAS trial.

“When you look at the course of Hb in ROCKIES, the advantage for roxadustat was seen early on and was maintained through the end of the course of study,” Dr. Fishbane said

A third trial, called OLYMPUS, which was pooled with other phase 3 trials for safety analysis, was placebo-controlled. In this trial, 2781 NDD patients with anemia were randomized. Hb <10 g/dL was an entry criterion.

For the primary endpoint of change in Hb from baseline to the average between weeks 28 and 52, the difference between roxadustat and placebo was statistically significant (1.75 vs. 0.40 g/dL; P<0.001). The response to roxadustat relative to placebo was already pronounced within two weeks of the start of the trial and has persisted through follow-up, which in some cases has now extended for two or more years.

“The drug worked whether iron status was acceptable at baseline or not,” reported Dr. Fishbane, who also presented the OLYMPUS results (Figure 4). Stating that the improvement in Hb for roxadustat relative to placebo was “exactly the same” for those with elevated CRP as observed in the study overall, he added, “This is a drug that seems to work in what is traditionally thought to be populations hypo-responsive [to ESA therapies].”

In a subsequent presentation by Dr. Provenzano, the data from these three studies were pooled along with three additional multicenter phase 3 trials. These included the ANDES and ALPS trials, which each randomized CKD patients not yet on dialysis to roxadustat or placebo, and the SIERRAS trial, which enrolled a population on dialysis and also associated roxadustat with superiority over epoetin alfa for the endpoint of change from baseline in Hb.

Together, these six trials provided data on more than 8000 patients with anemia, of which 4277 were NDD (6194 exposure years) and 3880 were DD (7059 exposure years). Before analyzing the safety of roxadustat within this data pool, which was the main focus, Dr. Provenzano reiterated the consistency of efficacy against anemia across trials, including the reduced need for rescue therapy in both NDD and DD populations. He further noted that roxadustat was associated with a significantly slower decline (P<0.0001) in renal function relative to placebo in the NDD trials.

“From these data, the drug appears to be effective, but what about safety?” asked Dr. Provenzano, who was referring to CV safety in particular.

CV safety is a critical issue because ESA agents are associated with an increased risk of CV events and venous thromboembolism (VTE). These risks have created the most pressing need for an alternative therapeutic strategy. To maximize power for evaluating this issue for roxadustat, phase 3 data were pooled.

The novel oral agent, roxadustat, a first-in-class therapy for anemia, has been found more effective than epoetin alfa in DD patients. In placebo-controlled studies conducted in NDD , roxadustat has been associated with rapid and sustained increases in hemoglobin. The pooled CV safety analyses showed that roxadustat did not increase the risk of MACE, MACE+ and all-cause mortality in NDD patients compared to placebo and DD patients compared to epoetin alfa.