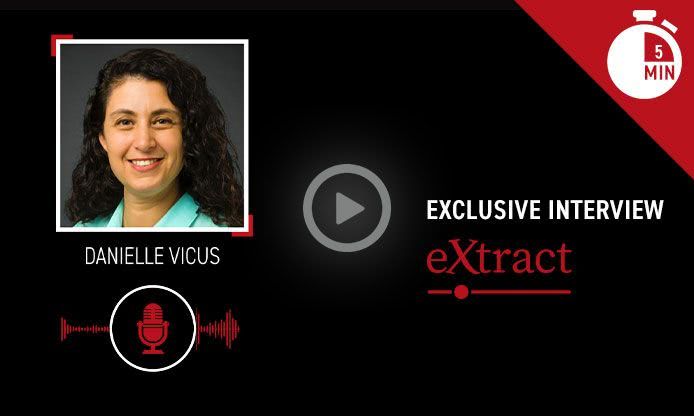 Clinically significant VTE encompasses both deep venous thromboembolism (DVT) and pulmonary embolism (PE). The classic Virchow’s triad depicts the underlying etiologic factors: vascular endothelial damage, blood flow stasis and hypercoagulability. In a study of over 1200 patients that developed a VTE, major surgery was associated with a 10-fold increased odds of developing a VTE. The risk was further increased in patients with malignancy and in those with additional risk factors; such as age over 40 years, obesity, or a prior history of VTE.7 Cancer and chemotherapy have been found to be independent risk factors for VTE. In one series of ovarian cancer patients, 10% had VTE as a presenting symptom.8 When followed through the course of therapy, 11.6% developed VTE during neoadjuvant chemotherapy, 5.4% developed a postoperative VTE, and 9.9% developed a VTE during adjuvant chemotherapy (Figure 1).

For an eLearning program with Dr. Danielle Vicus on the impact to clinical practice, click here

THE IMPACT OF VTE AFTER GYNECOLOGIC ONCOLOGY SURGERY

The consequences of DVT can be serious. When VTE occurs following surgery for ovarian cancer, it has been associated with a 2.3-fold increase in mortality.1 Up to 50% of patients with a proximal DVT will develop post-thrombotic syndrome (PTS), despite anticoagulant therapy.9 The symptoms of PTS, such as aching, swelling, and cramps, are variable in intensity and duration but have been associated with diminished quality of life.2

PE remains a relatively uncommon form of VTE, but the case-fatality rate for PE is substantial. In an evaluation of the risk of PE after gynecologic oncology surgery, the rates were found to be as high as 5%.10,11 In a study that assessed the impact of a post-operative PE among gynecologic oncology patients one-year survival was 77% in the absence of PE and 48% when a PE occurred.10,11

VTE is considered a preventable cause of death and complications.4 Prevention rather than treatment of VTE is critical because many of the major adverse health consequences, including death, can occur before reperfusion is achieved. In addition to the disability associated with chronic PTS,2 survivors of PE can face persistent dyspnea, exercise intolerance, or, in serious cases, chronic thromboembolic pulmonary hypertension.12,13

“Prevention rather than treatment of VTE is critical”

In the thromboprophylaxis guidelines issued by the ACCP, recommendations for abdominal-pelvic surgery are based on VTE risk as well as bleeding risk factors such as an uncontrolled bleeding disorder, a history of major bleeding, or a low hemoglobin level (<13 g/dL).4

According to risk estimates published in these guidelines, gynecologic cancer surgery patients have a baseline risk of VTE in the absence of thromboprophylaxis that is six-fold higher than healthy individuals. They further state that some form of VTE prophylaxis is appropriate in all gynecologic cancer surgery patients but must be considered in the context of bleeding risk. Although data cited in the ACCP guidelines predict a favorable risk-to-benefit ratio from pharmacologic VTE prophylaxis in gynecologic surgery patients or others at high risk for VTE, even when bleeding risk is elevated, it is no longer favorable for those at very high risk of major bleeding, defined as 4%. In those not otherwise at high risk for major bleeding complications, the ACCP guidelines recommend LMWH initiated prior to surgery and maintained for four weeks after surgery, referred to as extended prophylaxis.

In the ASCO guidelines, there is a blanket recommendation to initiate LMWH or UFH preoperatively to all patients with malignant disease undergoing major surgery unless contraindicated because of high bleeding risk.5 LMWH was recommended over UFH for perioperative thromboprophylaxis because of its ease of use in the ambulatory setting. In a Cochrane review, LMWH and UFH were comparable for the endpoints of DVT, PE, mortality, or bleeding,14 but many formulations of LMWH have the advantage of once-daily dosing, and LMWH is associated with a lower relative risk of heparin-induced thrombocytopenia (HIT).15

The ASCO guidelines further recommend adding mechanical thromboprophylaxis during the period of postoperative recovery. Mechanical methods alone are not recommended except in patients who are not candidates for pharmacologic anticoagulation.

Guidelines from the European Society of Medical Oncology (ESMO) for thromboprophylaxis in cancer patients undergoing surgery are generally consistent with those released by ASCO.16 Similarly, the ESMO guidelines emphasize that the risk of VTE is already elevated in patients with cancer but rise further in those who undergo surgery.

For prevention of VTE in cancer surgery patients overall, LMWH and UFH should be considered comparably safe and effective, according to the ESMO survey of published trials. However, as in the other cited guidelines, LMWH was identified as a first choice because of advantages that include once-daily dosing, a more favorable pharmacokinetic profile and the reduced risk of HIT. Relatively high doses, such as 4000 U of enoxaparin or 5000 U of dalteparin are recommended based on evidence of increased efficacy without increased bleeding.

In a Practice Bulletin from the American College of Obstetrics and Gynecology (ACOG) issued in 2007 and reaffirmed in 2012, a combination of LMWH or UFH plus mechanical prophylaxis was identified as appropriate in women undergoing surgery.17 However, the authors indicate that LMWH is preferred for the advantages of once-daily dosing and the potential for reduced bleeding and hematoma formation that stem from lower relative antithrombin activity. Like the ACCP guidelines, the ACOG further recommended combining pharmacologic and mechanical prophylaxis in the postoperative period, particularly in high-risk patients.

The guidelines from Thrombosis Canada for gynecologic surgery, identifies LMWH, for a duration of 30 days, as the preferred anticoagulant for VTE prophylaxis.6 Mechanical prophylaxis alone is recommended in those with a high risk of major bleeding. The Thrombosis Canada guidelines also accommodate selection of a venous thromboprophylaxis strategy based on individualized objective assessments for VTE and bleeding risks.

When compared, there is substantial consistency among the ACCP, ASCO, ACOG, ESMO, and Thrombosis Canada recommendations for VTE prophylaxis in patients undergoing major pelvic-abdominal surgery. Not all of these provide specific recommendations for gynecologic surgery, particularly for gynecologic cancer surgery, but they agree that VTE risk is high and hence the important role of appropriate dual prophylaxis.

Pharmacologic prophylaxis includes LMWH or UFH; LMWH is stated as the preferred drug. The major advantage of LMWH relative to UFH is less frequent dosing with no loss of efficacy. Some, but not all guidelines, cite a lower risk of HIT and the potential for lower rates of bleeding as potential LMWH advantages. All guidelines favor adding mechanical VTE prophylaxis in addition to LMWH. Most guidelines that provide specific recommendations for abdominal-pelvic surgery endorse initiating LMWH prior to surgery and extending prophylaxis through 28-30 days.

Guidelines specific to gynecologic cancer surgery reinforce the same principles of thromboprophylaxis as those endorsed by other professional organizations. The updated Enhanced Recovery After Surgery (ERAS) Society guidelines, published in 2019, reassert that VTE represents a major risk to patients with gynecologic cancer overall.3 Furthermore, this relative risk rises in those with additional risk factors including high body mass index, advanced age, ongoing treatment with chemotherapy, immobility, extra-pelvic disease, and an underlying hypercoagulable state. On the basis of this elevated risk, the ERAS guidelines recommend extended (28 day) VTE chemo- and mechanical prophylaxis in all gynecologic surgery patients who undergo major surgery lasting more than 30 minutes.

In the ERAS guidelines for abdominal-pelvic surgery, prophylaxis of up to 30 days is recommended after surgery. The data supporting the use of LMWH was characterized as high. Two trials associating longer duration LMWH with reduced risk of VTE provided the basis for this recommendation.21,22 In one trial, 28 days were compared to the standard seven days of dalteparin in 427 patients undergoing major abdominal surgery. The longer duration of prophylaxis was associated with a 55% relative VTE risk reduction (7.3% vs. 16.3%; P=0.012).21

In the second controlled trial, ENOXACAN II, 322 patients undergoing elective abdominal or pelvic surgery for cancer were randomized to a standard postoperative duration of enoxaparin (6 – 10 days) or to receive an additional 21 days.22 When evaluated after three months, there was a 60.1% reduction (5.5% vs. 13.8%; P=0.01) in favor of the longer duration. Bleeding rates were not significantly different between the arms.

The randomized controlled ENOXACAN study compared enoxaparin to UFH in patients undergoing cancer surgery.21 No difference was found in rates of thromboembolic events between the arms and enoxaparin administered once daily was shown to be just as effective and safe as UFH administered three times daily.

As such, ERAS guidelines state that LMWH is the preferred choice as it has a reduced chance of HIT and more predictable pharmacokinetic properties compared with UFH. Therefore, it can be administered in fixed doses without the need for dose adjustment based on laboratory monitoring.

The ERAS guidelines also reviewed the potential role of DOACs for VTE prophylaxis in gynecologic cancer surgery, however, the evidence was characterized as weak. Although efficacy for VTE prophylaxis has been documented following orthopedic surgery,26 there are as yet no high-quality studies in pelvic surgery assessing the risk of bleeding compared to LMWH and hence at this stage DOACs cannot be considered the standard of care.

The recommendations for venous thromboprophylaxis in abdominal-pelvic surgery and gynecology cancer surgery are largely consistent across guidelines. In guidelines from the ACCP, ASCO, ESMO, ACOG, Thrombosis Canada, and the ERAS Society, dual prophylaxis including both mechanical and pharmacologic extended LMWH is recommended (Table 1). Mechanical prophylaxis including either graduated compression stockings or sequential compression devices are recommended for added benefit but are not recommended alone except in those who have a contraindication for chemoprophylaxis. Several of these guidelines recommend the initiation of chemoprophylaxis prior to surgery, and most recommend an extended postoperative course, of 28-30 days. Evidence-based, these guidelines are designed to prevent the increased morbidity and mortality associated with DVT in a high-risk population.