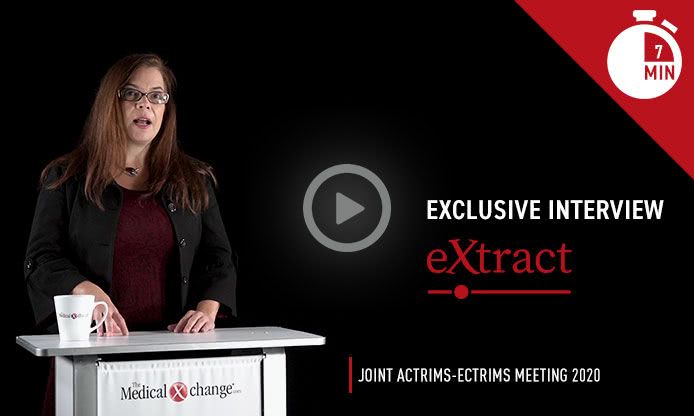 New data from the largest therapeutic trial ever conducted in SPMS confirms that a recently approved oral agent, siponimod, provides extended protection against the key clinical manifestations of disease progression. The data are drawn from the EXPAND trial and its long-term extension. Siponimod is now approved for the treatment of SPMS in many countries, including Canada. Among the new data, the association between siponimod and remyelination provides a foundation for understanding the major protection demonstrated against disability progression and cognitive decline.

For an exclusive interview with Dr. Sarah Morrow on the impact to clinical practice, click here

Prior to the phase 3 EXPAND trial, no treatment had consistently demonstrated an ability to slow progression in a representative SPMS population. In EXPAND, 1,651 SPMS patients were randomized to siponimod, a selective sphingosine-1 phosphate (S1P) inhibitor, or placebo. Despite advanced disease—more than 50% of patients at entry required walking assistance—there was more than 20% reduction (P=0.013) in the primary endpoint of 3-month confirmed disability progression (3mCDP) (Kappos L et al. Lancet 2018;391:1263-1273).

Earlier this year, data from the ongoing open-label long-term extension of the EXPAND trial, were presented at the virtual 2020 European Academy of Neurology (EAN) meeting (Fox L et al. EAN 2020, abstract EPR2128). At the start of the extension study, those on placebo in the controlled trial were switched to siponimod. After a mean 45 months of followup, the risk reduction for the endpoint of 6-month confirmed disability progression (6mCDP) was 22% (P=0.0026) for those on continuous siponimod relative to those switched. When calculated across the 25th to 50th percentiles of progression, continuous siponimod was associated with an average 49.3% relative 6mCDP delay.

In new long-term data presented at the 2020 ACTRIMS-ECTRIMS meeting, protection from disability progression in the core EXPAND trial and long-term extension was found to be greatest among those with active disease, defined as ≥1 relapse in two years before study entry and/or ≥1 T1 gadolinium-enhancing lesion (Giovannoni G et al. ACTRIMS-ECTRIMS 2020, abstract P0238). The greater benefit of siponimod in SPMS patients with active disease was previously reported in the pivotal trial, but the new long-term analysis found that active SPMS patients on continuous siponimod achieved a larger benefit in 6mCDP than those started on placebo and switched to siponimod.

When compared to those switched, “SPMS patients with active disease on continuous siponimod had a 29% [P=0.0044] lower risk of 6-month confirmed disability progression,” reported Dr. Gavin Giovannoni, Chair of Neurology, Blizzard Institute, Barts and the London School of Medicine, London, UK. For those in the 25th to 40th percentiles, there was an average 72% delay in the time to 6mCDP  (Figure 1).

In the group with non-active SPMS, the risk reduction for 6mCDP in followup through the long-term extension was 12.5% for those on continuous siponimod relative to those switched. This corresponded with a 30% delay in 6mCDP relative to placebo across the 25th to 40th percentiles, Dr. Giovannoni reported.

The relative benefit and the importance of early initiation of siponimod in patients with active disease were mirrored in relative risk of cognitive worsening, according to Dr. Giovannoni. For this analysis, patients were tracked for change in the Symbol Digit Modalities Test (SDMT), a well-validated tool for evaluating processing speed and cognitive function (Benedict RHB et al. Mult Scler 2017;23:721-723). For this analysis, a reduction of four points or greater at six months was employed to define cognitive worsening (6mCCW).

“In the active SPMS patients, risk of 6mCCW was reduced by 33% and time to 6mCCW was delayed by 70% in the continuous siponimod versus the placebo switch patients” in followup to date in the long-term extension trial, Dr. Giovannoni reported. In those with non-active SPMS, the reduction was 12.3% and time to 6mCCW was prolonged by approximately 45% (48.5 vs. 33.4 months) in the 40th percentile group.

Early initiation of siponimod relative to a delayed start, (as represented by placebo patients switched to siponimod), was also associated with a lower annual relapse rate (ARR) in patients with active SPMS, according to Dr. Giovannoni. In the combined data from the EXPAND trial and long-term extension study, the ARR of 0.07 for those in this subgroup on continuous siponimod represented a 39.7% reduction (P=0.0023) relative to the 0.11 ARR among patients switched.

In another substudy the benefit of siponimod for preserving cognitive function relative to placebo was found to be greater in those with active disease (Penner IK et al. ACTRIMS-ECTRIMS 2020, abstract P0806).

As previously reported in the pivotal EXPAND trial, fewer patients treated with siponimod than placebo had cognitive worsening based on a four-point of greater reduction in SDMT (24.6% vs. 31.2%; P=0.005). On a four-point or greater gain in SDMT, siponimod-treated patients also were significantly more likely to achieve cognitive improvements (34.8% vs. 27.1%; P=0.002).

In the newly released substudy, cognitive processing speed and function by change in SDMT were compared for those with active versus non-active disease at baseline over 24 months of followup in the EXPAND trial.

“These data confirm that the effects in regard to clinically meaningful changes [in cognitive function] were more pronounced in the SPMS patients with active disease,” reported Dr. Iris Katharina Penner, Department of Neurology, Heinrich Heine University, Dusseldorf, Germany.

“These data confirm that the effects in regard to clinically meaningful changes [in cognitive function] were more pronounced in the SPMS patients with active disease.”

Due to slow relative progression, “longer observation may be necessary” to detect meaningful changes in SPMS patients who start siponimod without active disease Dr. Penner said.

When cognitive changes from baseline were graphed for the active versus the non-active SPMS groups, siponimod was associated with significantly improved mean changes from baseline through two years in SDMT relative to placebo in patients with active and non-active disease  (Figure 3). The results were consistent with those observed in the overall population, Dr. Penner reported.

The clinical benefits in the EXPAND trial and the long-term extension study might be explained by the favorable effect of siponimod on myelin density and integrity, according to a newly completed post-hoc analysis of the EXPAND MRI study (Arnold DL et al. ACTRIMS-ECTRIMS 2020, abstract P0587). In this analysis, change in myelin was evaluated by measuring the magnetization transfer ratio (MTR), which is a marker of demyelination and axonal loss.

When compared to placebo in normal appearing brain tissue (NABT), cortical gray matter (cGM), and normal appearing white matter (NAWM), those randomized to siponimod either had an increase in MTR from baseline, or a reduction in relative MTR decline, indicating remyelination or protection from myelin loss. These differences, although not uniformly statistically significant, were consistent in subgroups stratified by age, disease duration, baseline Expanded Disability Status Scale (EDSS) score, or active versus non-active SPMS.

Relative to placebo, siponimod slowed MTR decrease over 24 months in these subgroups by 70% to 170% in NABT, by 44% to 188% in cGM, and by 79% to 198% in NAWM. By subgroup the most consistent effect was in NAWM, where most of the differences between siponimod and placebo at the end of two years reached statistical significance. There was no MTR increase in NABT, but siponimod did block the large reduction in MTR observed in the placebo group.

“These data support a central beneficial effect of siponimod on myelin repair mechanisms and corroborate the preclinical studies that also showed a favorable remyelinating effect.”

These differences only reached statistical difference among selected subgroups for NABT and to a lesser extent cGM, although the effect was consistent. For both NABT and cGM, the relative advantage for siponimod was significant for those with active SPMS. For NAWM, where the effect of siponimod on MTR was most pronounced, all differences but one did reach significance in favor of siponimod  (Figure 4).

Preservation of myelin provides a mechanism to explain the clinical benefit from siponimod observed in EXPAND and its open-label extension.

Ultimately, the combined data from the core and extension datasets from the EXPAND trial confirm a durable benefit from siponimod in SPMS.

“We know from these data that siponimod treatment effects on disability, cognitive processing speed, and relapse outcomes in patients with active SPMS are sustained for up to five years,” Dr. Giovannoni said.

The benefit of siponimod has also been accompanied with acceptable tolerability and safety. In the pivotal EXPAND study, the rate of serious adverse events was only modestly higher among those randomized to siponimod than placebo (18% vs. 15%) and the most common adverse events, such as elevated liver enzymes, hypertension, and bradycardia, imposed a low symptom burden.

Siponimod was approved for treatment of SPMS on the basis of a pivotal phase 3 trial demonstrating significant benefit in the delay of physical disability progression. New data from the EXPAND MRI substudy suggests that these benefits are likely to be derived from myelin preservation as measured with MTR. These data are consistent with the greater relative benefit of this agent in patients with active disease and the advantage of initiating siponimod early in the course of SPMS.