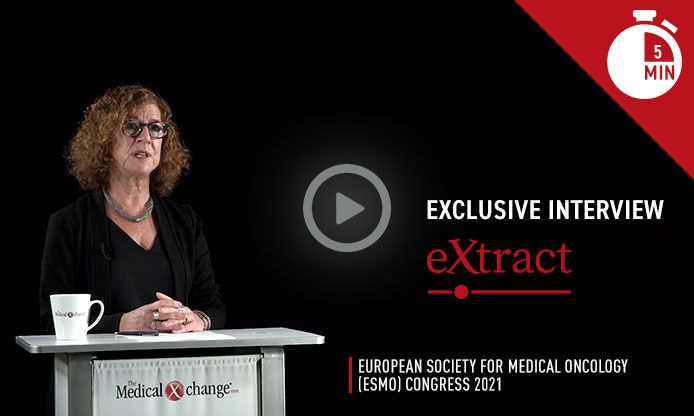 CDK 4/6 inhibitors are already widely used for this indication based on previously-published studies that have shown their benefit in progression-free survival (PFS) relative to an aromatase inhibitor alone. However, demonstrating an OS benefit is a milestone; it establishes the CDK 4/6 inhibitor ribociclib plus the aromatase inhibitor letrozole as the standard of care but also as a breakthrough. Achieving an OS benefit from a first-line therapy in breast cancer is uncommon due to the diluting effect of the multiple lines of treatment that follow. MONALEESA-2 demonstrates that starting with ribociclib plus letrozole extends survival regardless of subsequent treatments.

For an exclusive interview with Dr. Karen A. Gelmon on the impact to clinical practice, click here

“This is the first report of a median survival exceeding five years.”

In the double-blind multinational MONALEESA-2 trial, 668 postmenopausal women with HR+/HER2- advanced breast cancer were randomized to ribociclib or placebo. All patients received letrozole. About one third of patients had newly-diagnosed disease and the remaining had recurrent disease, but no patient had previous systemic treatment for advanced breast cancer. The oral therapies were administered on a three-weeks-on and one-week-off schedule until progression. Nearly all patients had stage IV breast cancer, but most had an ECOG performance status of 0 and none had a status >1.

The OS data build on the large PFS advantage in MONALEESA-2 that was published almost five years ago (Hortobagyi GN et al. N Engl J Med 2016;375:1738-1748). These data, which associated ribociclib plus letrozole with a 44% reduction in risk of progression or death relative letrozole plus placebo (HR 0.56; P=3.29 x 10-6), led to the regulatory approval of ribociclib.

Subsequently, ribociclib and other CDK 4/6 inhibitors have gained several indications in breast cancer, but an objective improvement in survival among postmenopausal women treated first-line with a
CDK 4/6 inhibitor remains unique to ribociclib. In the PALOMA-2 trial with palbociclib (Finn RS et al. N Engl J Med 2016;375:1925-1936) and the MONARCH-3 trial with abemaciclib (Goetz MP et al. J Clin Oncol 2017;35:3638-3646), improvement in outcome has so far been limited to PFS.

Yet, the 24% (P=0.004) survival advantage for adding ribociclib to an aromatase inhibitor is not modest, and it increased over time (Figure 2). Following a separation of the survival curves about two years after randomization, these gains were observed even though approximately 90% of patients in both arms of the study received subsequent antineoplastic agents. This included a CDK 4/6 inhibitor in 34.9% of patients in the control arm.

Although the survival benefit from ribociclib/letrozole has not been established until now, Dr. Gómez Abuin praised regulatory authorities for approving ribociclib on the basis of the strong PFS benefit, which he considers an important and valid endpoint in a disease for which there are multiple options for second-line therapy. He explained that we now know that this combination of ribociclib and letrozole has been saving lives of postmenopausal women with advanced cancer since its approval in 2017.

“We have to consider how many patients would have been denied the advantage of this therapy if approval had been withheld until the OS data were mature,” he said (Figure 3).

One of the advantages of the all-oral regimen of ribociclib and letrozole is the convenience of avoiding drugs that require injection or infusion. Further, ribociclib has also been well tolerated in MONALEESA-2 as well as in other clinical settings where it has been tested. Although not without adverse events, most events of grade 3 or higher are hematologic, particularly neutropenia and leukopenia. Generally asymptomatic, the cytopenias were mostly observed within the first few weeks of treatment. Within the first 18 months of the study, the rate of infections was only modestly higher in the group randomized to ribociclib (50.3% vs 42.4%).

“We have to consider how many patients would have been denied the advantage of this therapy if approval had been withheld until the overall survival data were mature.”

Over the course of the study, there were no new safety signals, according to Dr. Hortobagyi. In the published results, the most common non-hematologic grade 3 or higher adverse events were vomiting (3.6% vs. 0%), nausea (2.4% vs. 0%), and fatigue (2.1% vs. 0%). No other non-hematologic grade 3 or higher adverse event other than liver enzyme elevations occurred in more than 1% of patients. In the much longer follow-up available with the OS data, the rates of significant adverse events remained low.

“These therapies are well tolerated in general as we have now seen over the course of the long-term follow-up,” according to Dr. Hortobagyi.

Both the efficacy and the safety of ribociclib have been demonstrated in other advanced breast cancer populations. In the MONALEESA-3 trial published 18 months ago (Slamon DJ et al. N Engl J Med 2020;382:514-524), there was a similar OS benefit achieved in patients randomized to ribociclib or placebo on a background of the selective estrogen receptor degrader fulvestrant. That phase 3 trial also enrolled patients with advanced HR+/HER2- breast cancer, but it expanded enrollment to patients who had received one prior line of therapy and those who had a relapse within 12 months of completing adjuvant or neoadjuvant endocrine therapy.

“These therapies are well tolerated in general as we have now seen over the course of the long-term follow-up.”

Overall Survival Benefit in MONALEESA-3 and -7

Similar to MONALEESA-2, the OS benefit in MONALEESA-3 was shown despite the fact that most patients received subsequent lines of treatment. This included a CDK 4/6 inhibitor in 25.4% of the patients initially randomized to the control arm. As in MONALEESA-2, the combination of an aromatase inhibitor and ribociclib was well tolerated. Again, most grade 3 or higher adverse events were confined to hematologic events with no new safety signals in the extended OS follow-up.

In MONALEESA-7, an OS benefit was also achieved with first-line ribociclib and an endocrine therapy in advanced breast cancer. In this trial, enrollment was restricted to pre- and perimenopausal women with HR+/HER2- locoregionally recurrent or metastatic disease. Patients were randomized to ribociclib or placebo in addition to goserelin, tamoxifen or either or two nonsteroidal aromatase inhibitors (letrozole or anastrozole).

All three of these trials reinforced the value of employing ribociclib in a first-line regimen. In MONALEESA-7, like the other trials in this series, most patients received subsequent lines of therapy, including a CDK 4/6 in a substantial proportion of patients. When the time to a subsequent second-line therapy was calculated in MONALEESA-7, there was a significant 31% risk delay (HR 0.69) among those who received ribociclib upfront in the time to a second-line therapy. The safety analyses in MONALEESA-7 also reinforced the relatively low risk of adverse events and acceptable tolerability over long-term treatment.

The CDK 4/6 inhibitors have yet to be compared directly, but there are differences between these agents that might be relevant to clinical effect and safety. Relative differences in lipophilicity, receptor binding, selectivity relative to off-target kinases, and half-lives suggest these drugs might not be interchangeable. In cross-trial comparisons, the types and frequencies of toxicities have differed (George MA et al. Front Oncol. 2021;11:693104) even when PFS rates have been similar when similar populations were treated. However, despite the fact that palbociclib was the first CDK 4/6 agent approved for use in advanced breast cancer, neither this agent nor abemaciclib has yet achieved a statistically significant OS benefit in the first-line setting for postmenopausal women.

There are differences between CDK 4/6 inhibitors that might be relevant to clinical effect and safety.

According to Dr. Hortobagyi, the OS benefit now observed in three trials with ribociclib as part of a first-line combination therapy in advanced breast cancer cannot be assumed to be shared by other agents in this class. He said data are needed from controlled trials. On the basis of his long career as a clinical trialist in breast cancer, he stressed that the findings of the MONALEESA series of studies are both uncommon and a major advance.

“A PFS benefit has been shown many, many times [but] we have rarely observed an improvement in OS,” he said. The reason is that “patients receive four to 15 different types of treatment over the course of their disease and these dilute the effect of the first therapy.” In contrast, there is now evidence that the inclusion of the CDK 4/6 inhibitor in the first-line setting extends life regardless of treatments that follow.

“A PFS benefit has been shown many, many times [but] we have rarely observed an improvement in overall survival.”

The OS results from MONALEESA-2 have established a new standard of care in the first-line therapy for postmenopausal women with HR+/HER2- breast cancer. The data have associated the combination of the CDK 4/6 inhibitor ribociclib and an aromatase inhibitor with a mean additional year of life, providing an average survival that exceeds five years— a duration never before achieved in this population. Over the course of follow-up, the all-oral combination of ribociclib and letrozole was generally well tolerated.