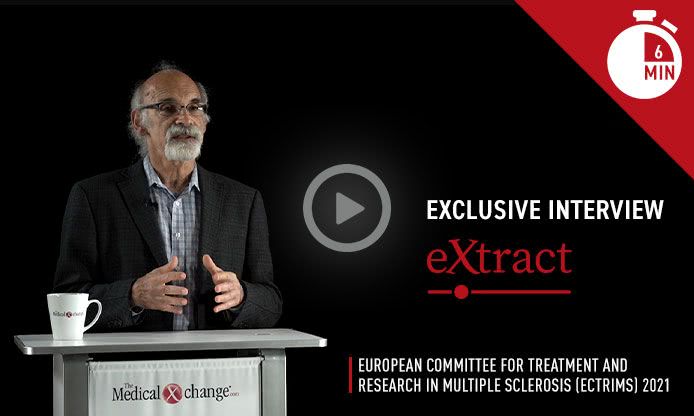 In patients with SPMS, substantial axonal damage has already occurred. Approval of the selective sphingosine-1-phosphate (S1P) receptor modulator, siponimod, was based on protection from progressive disability in the pivotal phase 3 EXPAND trial. There are now several sets of experimental studies in preclinical models that associate siponimod with neuroprotective and/or pro-remyelination effects. These data might explain why initiating active therapy promptly after an SPMS diagnosis improves long-term benefit.

For an exclusive interview with Dr. Daniel Selchen on the impact to clinical practice, click here

In extended EXPAND follow-up presented at the most recent ECTRIMS Congress, “efficacy has been sustained on continuous siponimod for up to 7 years with persistent reductions in progression and prolonged time to confirmed disability,” reported Dr. Bruce A.C. Cree, Professor of Neurology, Weill Institute for Neurosciences, University of California, San Francisco.

“Efficacy has been sustained on continuous siponimod for up to 7 years with persistent reductions in progression and prolonged time to confirmed disability.”

In the absence of placebo controls out to 7 years, the Rank Preserving Structural Failure Time (RPSFT) was used to create a virtual placebo group. Established 30 years ago to adjust for treatment switching in trials with survival outcomes, RPSFT provides a “counterfactual time to confirmed disability progression as if the placebo patients had never switched,” Dr. Cree explained.

With evidence of disability protection out to 7 years after the initiation of treatment, “longer observation periods will be required to uncover the full impact of siponimod treatment,” Dr. Cree reported.

The advantage of siponimod over time may not stem from anti-inflammatory effects. At the ECTRIMS Congress, an EXPAND optical coherence tomography (OCT) sub-study showed protection against retinal thinning, a potential marker of neurodegeneration. In addition, remyelination and a shift towards pro-regenerative microglia was observed in two preclinical models of SPMS, contributing to already existing experimental evidence that siponimod may limit neurodegeneration and in addition, may have remyelinating properties.

In the EXPAND OCT sub-study, retinal layers were monitored with OCT at baseline and at intervals out to 24 months in 104 siponimod and 55 placebo patients. Ocular assessments included the retinal nerve fibre layer (RNFL), the combined ganglion cell and inner plexiform layers (GCIPL), and retinal thickness measurements.

Relative to placebo, “siponimod showed a significant treatment effect in reducing global retinal thinning at both months 12 and 24 and in GCIPL at month 24,” reported Dr. Patrick Vermersch, Department of Neurology, INSERM, University of Lille, France (Figure 3).

“These OCT findings appear to be in line with previously reported beneficial effects of siponimod on other outcomes related to neurodegeneration, including grey matter atrophy and adverse MTR [magnetization transfer ratio] changes in normal-appearing brain tissues,” Dr. Vermersch added.

“These OCT findings appear to be in line with previously reported beneficial effects of siponimod on other outcomes related to neurodegeneration.”

By itself, inhibition of retinal thinning is already a measure of potential clinical benefit. Abnormal thinning of GCIPL has been associated with impaired visual function in MS patients, according to Dr. Vermersch. In addition, abnormal thinning correlates with axonal loss, brain atrophy, and MS-related disability, “making this [OCT] a potential marker of disease progression and neurodegeneration” as well as a tool for evaluating the treatment effect of MS therapies.

Of several experimental studies associating siponimod with remyelination, one also looked at the impact of this drug on optic neuritis. Summarized by Dr. Michael Dietrich, MD, Department of Neurology, Heinrich-Heine-Universität, Düsseldorf, Germany, OCT was again employed to look at thickness of retinal layers and visual function in female mice fed with siponimod or vehicle in a cuprizone-intoxication model.

In a scoring system for injury in the optic neuritis (EAEON) model, prophylactic siponimod “attenuated the EAEON scores by up to 95%,” Dr. Dietrich reported. This was correlated with protection against visual loss, but Dr. Dietrich also reported remyelination that suggested a fundamental reversal of disease pathophysiology.

The reduction in inflammatory infiltrates and demyelination of the optic nerve was observed “even after therapeutic treatment, which also shifted microglial differentiation to a pro-regenerative phenotype,” Dr. Dietrich said.

Based on his data, which also included a study in which siponimod improved remyelination in an amphibian SPMS model, Dr. Dietrich believes that siponimod has a direct favorable impact on oligodendrocytes. His study further suggests this drug activates microglia to reverse tissue damage.

Emphasizing the greater impact exerted by siponimod on immune cells at higher concentrations, Dr. Dietrich concluded that “its effects on remyelination and regeneration are dose-dependent.”  He believes the observations might provide insight into the sustained benefits observed clinically.

“The effects of siponimod on remyelination and regeneration are dose-dependent.”

Of these benefits, protection against disability progression might not be the only consequence of neuroprotection and remyelination. Recently, another EXPAND sub-study was published associating siponimod with clinically meaningful protection against cognitive loss (Benedict RHP et al. Neurology 2021; 96: e376-e386). A common complication of MS overall and SPMS in particular, cognitive impairment is considered by many patients to be as disruptive and debilitating as physical impairments. In regard to the potential impact of siponimod on underlying pathophysiology, it is notable that active treatment has shown beneficial effects on cognition as measured by improved cognitive processing speed.

In this EXPAND sub-study, there was a 21% reduction (HR 0.79; P=0.0135) at 2 years in the hazard ratio of a four-point or greater decline relative to baseline in the Symbol Digit Modalities Test (SDMT), a validated method of assessing cognitive function. In addition, there was a 27.5% increase in likelihood of achieving a four-point or greater improvement from baseline (HR 1.28; P=0.0131) in SDMT (Figure 4).

This study did not determine the underlying mechanism supporting the cognitive effects, but the previously reported treatment effects observed on imaging, such as reduced brain volume loss, are consistent with the cognitive findings, according to the first author of this study, Dr. Ralph H. Benedict, Department of Neurology, Jacobs School of Medicine, University at Buffalo, Buffalo, New York.

Cognitive symptoms are likely to gain in importance in SPMS with evidence that they can be reversed. In a study presented at ECTRIMS, patients were found to be far more sensitive to cognitive impairments than physicians, many of whom do not screen patients routinely for cognitive loss. In the study, 11,220 RRMS and SPMS patients in Europe and North America were surveyed about cognitive and mood symptoms. Problems of concentration were reported by 83.9% of SPMS patients and 56.6% of RRMS patients. The disparity between patient and physician perceptions was large.

These data are concerning because of the evidence that cognitive dysfunction is an important clinical manifestation of SPMS, according to Dr. Penner. With a therapy now known to favorably impact cognitive function, screening for symptoms has gained clinical importance.

“We know that cognitive dysfunction is often going undiagnosed because MS patients are not being assessed routinely,” Dr. Penner said. She called assessment and intervention “an unmet need” in MS management.

When siponimod was approved, it was the first new therapy for SPMS in two decades. The initial approval was based on a significant reduction in risk of confirmed disability progression in a representative SPMS population. The extended follow-up showed that patients who started on siponimod maintained benefits at 5 years compared to those who started on placebo and later switched to siponimod.  The latest data extends this advantage to 7 years. With emerging data that the neuroprotection of siponimod might be accompanied by restorative effects on brain tissue including remyelination, early treatment to alter the trajectory toward progressive physical and cognitive impairments is encouraged.

Due to the importance of vaccines in reducing the risk of infection and complications from the SARS-CoV2 infection, it is important to consider the impact of MS therapy on response to the mRNA vaccines now widely used for preventing infection. Interim data from the AMA-VACC clinical trial presented at the 2021 ECTRIMS Congress found that 66% of MS patients on siponimod mounted an immune response to a SARS-CoV-2 mRNA vaccine one week after the second dose.

The AMA-VACC data presented at ECTRIMS included 17 patients who were taking siponimod at the time of vaccination, four patients who interrupted siponimod in order to be vaccinated, and 20 MS patients on another disease modifying therapy or no therapy. According to Dr. Tjalf Ziemssen, Department of Neurology, Center for Clinical Neuroscience, University Hospital, Dresden, Germany, several measures of response were evaluated, “Nearly 2 out of 3 patients with SPMS on siponimod developed an immune response to SARS-CoV-2 mRNA vaccines. Overall, this is in line with previous vaccination studies in S1P modulators as well as in recent publications recommending SARS-CoV-2 vaccinations for MS patients receiving a disease-modifying therapy,” Dr. Ziemssen reported.

However, Dr. Ziemssen cautioned against the development of neutralizing antibodies as an isolated measure of immunity following vaccination. Rather, humoral and/or cellular responses should be considered.

In the AMA-VACC analysis, there were no significant adverse events associated with siponimod or other disease modifying therapies in relationship to the vaccine. There have been no COVID-19 infections in the AMA-VACC study population. Dr. Ziemssen acknowledged that the interim data is based on a relatively small number of patients and that longer follow-up are needed to evaluate immune response over time, including response to booster vaccinations, but he found these data encouraging. “Overall, the safety results were in agreement with previous safety data both for MS disease modifying therapies and vaccines,” Dr. Ziemssen reported.