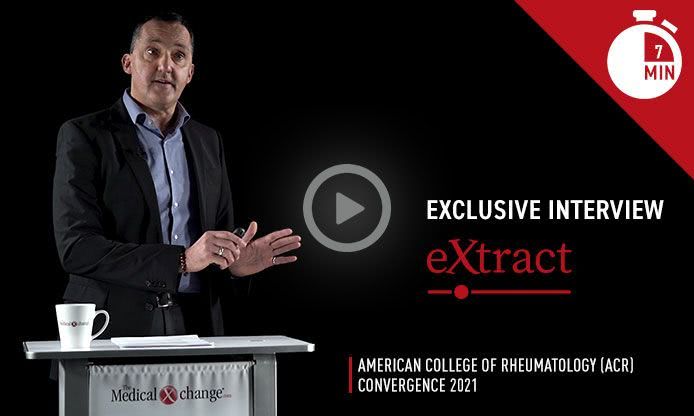 In the JUNIPERA study, presented at the 2021 ACR Convergence, response to an IL-17i among children and adolescents with ERA and JPsA was achieved rapidly. Disease control was maintained in most patients for the full 104 weeks of follow-up. The study was conducted with secukinumab, an IL-17A inhibitor that has had an indication in adults for treatment of nr-axSpA and other forms of ankylosing spondylitis, for more than 5 years.

For an exclusive interview with Dr. Johannes Roth on the impact to clinical practice, click here

“The majority of patients achieved a profound improvement in enthesitis and dactylitis scores sustained over the 2-year period,” Dr. Brunner said.

The majority of patients achieved a profound improvement in enthesitis and dactylitis scores sustained over the 2-year period.

This efficacy of treatment resulted in a significantly longer time to flare for patients randomized to secukinumab. By the end of blinded treatment, the median time to flare had not been reached in this group, whereas the median time was 453 days in the placebo group. This was a relatively long delay in a patient population with active disease but it is explained by the initial open-label induction. For entry into the blinded phase of the study, at least an American College of Rheumatology (ACR) 30 response (a ≥30% symptom improvement from baseline multiple markers of disease activity, such as number of joints with active arthritis) was required during the open-label phase.

Very few patients who participated in the 12-week open-label phase of JUNIPERA were excluded from the blinded phase by the ACR30 response criterion. Not only did nearly 90% of the open-label patients achieve at least an ACR30 response, but 83.7% achieved an ACR50 response, and the majority (67.4%) of enrolled patients achieved ACR70. The proportion of patients that achieved a complete symptom resolution (ACR100) by 12 weeks was substantial at 24.4% (Figure 2).

In the JUNIPERA study, 97 children (age >2 years) or adolescents were screened. Entry criteria included a confirmed diagnosis of active ERA or JPsA for at least 6 months, an inadequate response to at least one nonsteroidal anti-inflammatory drug (NSAID) and one disease-modifying anti-rheumatic drug (DMARD), and history or current enthesitis.

At baseline, the disease activity as defined by the 27-joint Juvenile Arthritis Disease Activity Score (JADAS-27) was 14.8 in the 52 children with ERA and 15.5 in the 34 children with JPsA. About two-thirds of patients in both groups were on methotrexate. The mean total enthesitis counts in the ERA and JPsA groups were 2.7 and 2.3, respectively. The mean total dactylitis counts were 0.4 and 1.8. All of these characteristics identify a group of patients with significant disease involvement. “A score of 15 on JADAS-27 represents a fairly high degree of symptom activity,” according to Dr. Brunner.

Of the 86 patients enrolled, 83 completed the 12-week open-label phase, which consisted of five weekly loading doses of secukinumab followed by monthly maintenance doses. The weight-based subcutaneous injections were 75 mg for children weighing <50 kg and 150 mg for children ≥50 Kg. The mean age was about 13 years. The mean weight was approximately 56 kg.

When enthesitis and dactylitis responses were assessed separately, the efficacy was greater for dactylitis but substantial for both. Over the treatment period, the flare risk among patients randomized to secukinumab rather than placebo was 85% (HR 0.15) for dactylitis and 55% (HR 0.45) for enthesitis.

The rapid response and sustained efficacy of secukinumab was reflected in the mean JADAS-27 values that were tracked through all three treatment phases. During the first treatment period when all patients received open-label secukinumab, JADAS-27 scores dropped quickly and steadily from baseline almost immediately. At 12 weeks, the mean score was 4.6, which signifies relatively low disease activity, but the scores continued to drop following randomization whether patients were placed on maintenance secukinumab of placebo (Figure 3).

During the first weeks of the open-label treatment phase, there were steep reductions in the JADAS-27 scores.

The sustained reductions in JADAS-27 in the second treatment phase even among patients randomized to placebo were credited to a sustained response after open-label therapy. By week 104 of the blinded treatment period, flares had required a higher proportion of patients in the placebo group to leave the blinded phase and join the second open-label phase. However, the mean JADAS-27 score remained below 3.8 in those without a flare who stayed in the blinded portion of the study.

The safety of secukinumab in this pediatric population “was consistent with what has been previously reported [for secukinumab in a large trial experience],” according to Dr. Brunner. This news is promising for pediatric patients who will ultimately transition to adult care. Although the total proportion of patients experiencing an adverse event during the blinded phase of the JUNIPERA study was higher (91.9% vs. 76.3%), many differences in treatment-emergent adverse events were modest. When expressed as events per 100 patient-years of follow-up (100pyf), this included gastrointestinal disorders (51.4 vs. 49.3 100pyf), musculoskeletal and connective tissue disorders (32.4 vs. 29.7 100pyf), and skin and subcutaneous tissue disorders (24.4 vs. 32.4 100pyf) for secukinumab and placebo, respectively. Nervous system disorders (9.2 vs. 15.4 100pyf) were lower on secukinumab.

The safety […] in this pediatric population was consistent with what has been previously reported in adults.

The exception was infections and infestations, which were higher on secukinumab (158.2 vs. 112.5 100pyf). For specific adverse events, there was a higher proportion of patients in the secukinumab group with nasopharyngitis (37.8% vs. 15.8%) and pyrexia (16.2% vs. 5.3%). Dr. Brunner reported that none of these events were life-threatening. The proportion of patients in the secukinumab and placebo groups with upper respiratory tract infections (16.2% vs. 15.8%, respectively) was similar.

For ankylosing spondylitis in adults, the IL-17A inhibitor secukinumab was the first biologic approved as an alternative to tumor necrosis factor inhibitors (TNFi). In the pivotal MEASURE 1 and MEASURE 2 trials which led to regulatory approval, the proportion of patients achieving the primary endpoint of 20% improvement in the Assessment of SpondyloArthritis International Society (ASAS20) on the 150-mg secukinumab dosing regimen was more than double that achieved in the placebo group (61% vs. 28%; P<0.001) (Figure 4).

The results are consistent with the role of IL-17 signaling in the pathogenesis of inflammatory diseases overall and in those affecting the joints and skin in particular. While secukinumab is now commonly used as a first-line option or as an alternative to TNFi in several forms of ankylosing spondylitis and psoriatic arthritis, it has now been joined by two other drugs in this class. Ixekizumab now shares many indications with secukinumab, and both drugs, along with a third IL17i, brodalumab, are approved for plaque psoriasis. Brodalumab has not yet been given an indication for rheumatologic diseases, and none of the drugs have been compared directly in a multicenter controlled trial.

Role of IL-17 Inhibitors in the Pathogenesis of Disease

The pediatric data further confirm the value of IL-17 inhibition in the pathogenesis of inflammatory joint diseases. Secukinumab targets IL-17A, which has shown to be upregulated in the subchondral bone marrow in experimental and in clinical ankylosing spondylitis. Other IL-17 subtypes as well as IL-23 are implicated in several autoimmune diseases, but the best proof of the importance of IL-17A as a target in axSpa and PsA is provided by the substantial clinical efficacy of inhibitors of this target in multicenter clinicals studies that includes significant radiological as well as clinical responses. Five positive phase 3 trials were conducted in secukinumab in the course of clinical development. Published real-world experiences have supported the activity as well as patient satisfaction. In one such study, 77% of ankylosing spondylitis patients reported that secukinumab was superior to their previous treatment (Magrey M et al. Ann Rheum Dis. 2018;77(Suppl 2):1014).

The safety of secukinumab for pediatric forms of nr-axSpA and JPsA are reassuring but also consistent with the extensive adult experience not only in ankylosing spondylitis and PsA but in several forms of psoriasis, including plaque psoriasis, for which it is also indicated. The most common side effect reported previously as well as in the JUNIPERA study is an increased risk of infections, but serious infections have been rare. The relationship between secukinumab as well as other biologics and uveitis or inflammatory bowel diseases (IBD) is uncertain because risk of these events is already increased in candidates for biologics. In JUNIPERA, one patient developed IBD and two developed uveitis, but Dr. Brunner said that the cases of uveitis were not considered treatment related.

With open-label and blinded phases, the design of the JUNIPERA study provided several opportunities to evaluate the efficacy and safety of secukinumab in ERA and JPsA. In the open-label induction phase, nearly 90% of pediatric patients met a minimum response criterion of ACR30 by the end of 12 weeks. The majority achieved ACR70, and a substantial minority of patients had complete symptom resolution. In the subsequent blinded phase, disease control persisted for an extended period even among those randomized to placebo. By the end of 104 weeks, maintenance secukinumab provided a 72% reduction in risk of disease flare. Although there were some adverse events more common in patients randomized to secukinumab than placebo—most notably infection—the rates were similar to those reported in adult studies. The efficacy and safety results of the JUNIPERA study offers reassurance for pediatric patients who will eventually transition to an adult clinical setting.

The experience with an IL-17i in ERA and JPsA suggests that the disease pathways in these pediatric autoimmune diseases are similar to those of nr-asSpA and PsA, respectively. These reinforce IL-17A as a specific target in the common disease pathways.