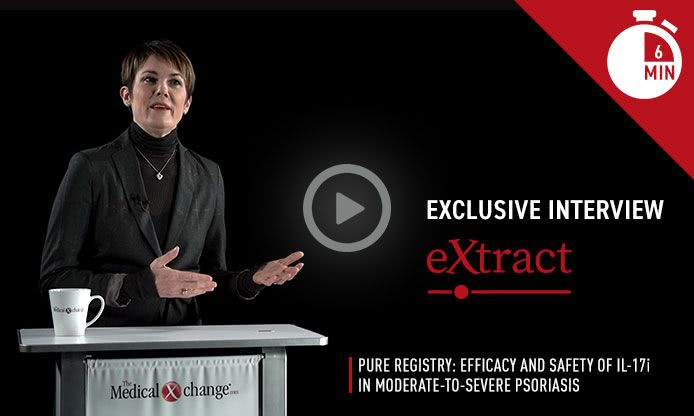 Psoriasis is a chronic autoimmune inflammatory skin disease strongly associated with genetic susceptibility.1 Of the various types of psoriasis, which include guttate, pustular, and erythrodermic forms, plaque psoriasis is the most common, accounting for 90% of cases.2 A population-based study of adults in Ontario identified a cumulative prevalence of 2.54%.3 Males and females were about equally affected. These rates are consistent with those reported in other western countries.1

For an exclusive interview with Dr. Melinda Gooderham on the impact to clinical practice, click here

Although psoriasis is a chronic disease often requiring indefinite periods of treatment, severity at presentation and over time is variable. In one study of 500 patients, 20% had minimal disease activity and about the same proportion had severe activity at the end of 10 years of follow-up.4 The remainder—representing the majority—had moderate-to-severe skin involvement even if symptoms waxed and waned over that 10-year period.

Severity of psoriasis is typically characterized with objective measures, such as body surface area involvement, but these measures do not necessarily capture disease burden. Due to the discomfort and adverse cosmetic impact of skin lesions, particularly those in visible areas, psoriasis can exert a large unfavourable impact on sense of well-being and self-esteem.5 This is not just reflected in diminished quality of life, but active psoriasis is also associated with reduced levels of employment and income.6

Prior to the introduction of biologics, moderate-to-severe psoriasis was not adequately controlled. In a 1000-patient survey conducted in 2005 just before TNFi were widely available, less than 40% of patients responded that their systemic therapy was satisfactory.7

Towards the Path of Disease Control with Biologics

When drugs in the TNFi class were introduced, the rates of disease control achieved were unprecedented. In a pivotal trial with the TNFi etanercept, the PASI 75 at week 12 was 49%,8 a level typically reached in less than 20% of patients treated with methotrexate.9 However, the need for alternative agents in this class and for new classes of biologics was apparent from the beginning. Despite TNFi efficacy, not all patients respond to therapy, and a substantial proportion lose response over time.

Overall, the rate of primary non-response to TNFi is about 20%.10 Although many patients respond to a different TNFi, the efficacy is typically diminished. In one overview, the peak PASI score for a second TNFi, whether the switch is for lack of response or loss of response, is about 25% lower than an initial TNFi (51.4% vs. 67.7%).11 Moreover, disease control on TNFi diminishes over time. In some studies, up to 32% of patients with a PASI 75 response have lost this degree of control within the first year.12

Secukinumab was granted regulatory approval about 5 years ago. Among biologics approved for psoriasis, secukinumab now has the longest follow-up, supplemented by extension data from the phase 3 programs in psoriasis, as well as those for treatment of psoriatic arthritis and ankylosing spondylitis.13 The most recent data was collected in the PURE registry program,14 which now has follow-up extending to 36 months.

Long-Term Outcomes with an IL-17A Inhibitor

Secukinumab targets IL-17A, a proinflammatory cytokine that has proven targetable in many autoimmune diseases, including psoriatic arthritis and ankylosing spondylitis.15 Following positive phase 2 studies,16,17 the phase 3 trials, ERASURE and FIXTURE, were published together in 2014.18 In ERASURE, 738 patients were randomized to subcutaneous secukinumab or placebo. In FIXTURE, 1306 patients were randomized to secukinumab, placebo, or the TNFi etanercept. With the exception of etanercept, all therapies were administered once weekly for five weeks then every four weeks thereafter. Etanercept was administered twice weekly for 12 weeks then once weekly.

A similar persistence of benefit was observed in the extension SCULPTURE trial with secukinumab.19 Of 168 patients evaluated at year 1, the PASI 75 response was 88.9%. At year 5, when 126 patients were still evaluable, the PASI 75 response was 88.5%. At both time points, the proportion of patients with a PASI 100 response, signifying the elimination of skin lesions, exceeded 40%.

In a series of recent updates from the PURE registry, which has enrolled 2,462 adults with plaque psoriasis from 89 sites in Canada (89%) and Latin America (11%), the data are showing the same degree of sustained efficacy among patients on secukinumab.20 Representing 848 patients (34.5%) of the registry population, the secukinumab patients experienced a major reduction from baseline in every measure of psoriatic involvement, but there were incremental gains over time. The reductions in overall body surface area (BSA) over 36 months were representative of the progressive benefit (Figure 2).

PASI scores for scaling, erythema, and thickening at 3, 6, 12, 18, 24, and 36 months showed the same pattern, with a large immediate reduction from baseline followed by further incremental improvements over time. These improvements were paralleled by patient-completed Psoriasis Symptom Diary (PSD) scores, which covered scaling, cracking, pain, burning, stinging, itching, and skin color. The symptom reductions translated into major improvements in quality of life across multiple domains, including embarrassment, which fell from a baseline score of 5.6 on a scale of 0 to 10, to 1.2 at 6 months, 1.0 at 24 months and 0.8 at 36 months.

The PURE registry also examined real-world persistence over time in patients on secukinumab relative to ixekizumab.21 Not confined to efficacy, persistence captures tolerability, ease of use, and other variables leading to the ability to remain on therapy. There was 48 months of follow-up among the 848 patients treated with secukinumab and 42 months of follow-up among the 165 patients treated with ixekizumab. Over time, there was a greater loss of persistence in the ixekizumab group even though the dose was uptitrated in a greater proportion of those on ixekizumab vs. secukinumab (36.4% vs. 24.4%) (Figure 3). The most common reason for treatment discontinuation in both groups was loss of treatment efficacy.

Of the PURE registry updates, the differences in speed of response across anatomical sites in a real-world setting might contain the most important clinical message.22 Relative to resolution of psoriatic lesions on limbs, disease control occurred more rapidly on the trunk, head and neck body regions (Figure 4). For example, PASI regional scores demonstrated improvement by month 3 in the head and neck but were not reached until month 18 in the arms. The same pattern was seen for other scores, such as erythema and scaling, but all scores were low at month 36 even if they were not achieved at the same pace.

For counseling patients, the real-world experience in the PURE registry demonstrates that a steep improvement in the signs and symptoms of psoriasis follows quickly after the initiation of secukinumab, but there is continuous incremental benefit observed up to 3 years. While these data are consistent with the extension studies showing high rates of sustained disease control in patients followed 5 years or more, patients should recognize that improvements do not proceed at the same pace across anatomical sites of disease involvement.

The high rates of efficacy associated with secukinumab documented in numerous clinical studies over nearly 10 years of experience were predicted by the mechanism of action. Relative to older biologics, the target of secukinumab, IL-17A, is more specific for psoriasis. The primary effector of Th17 cells,23 IL-17 is released by several types of cells active in psoriatic lesions, including neutrophils and T cells. Once in circulation, IL-17 is a major mediator and orchestrator of the downstream events that characterize psoriatic inflammation.24,25 IL-17 has been characterized as a master cytokine in psoriasis,18 and it has proven to be a targetable driver of other autoimmune diseases including psoriatic arthritis.26 More head-to-head comparisons of biologics in psoriasis are needed, but cumulative data indicate that IL-17i overall, and secukinumab specifically, are effective and well tolerated. Once widely regarded as a second-line biologic, secukinumab is now recommended as a first-line monotherapy for adult patients with moderate-to-severe plaque psoriasis.27

Double-blind multicenter phase 3 trials play a critical role in the regulatory process. However, extension and registry data are also essential for reaffirming efficacy and safety over time and in evaluating persistence—which is also a factor in sustained disease control. At 42 months, the PURE registry associates secukinumab with incremental gains in disease control over time and after immediate response. It also confirms a high rate of persistence with therapy. Although the speed of improvement varies at specific anatomical sites, high rates of control are achieved with secukinumab across all areas of involvement.

21.       Gooderham M, Lynde CW, Deforme I, Langley RG. Treatment persistence of secukinumab and ixekizumab in patients with moderate to serere psoriais: results from the PURE Registry. European Association of Dermatology and Venerology 2021;P1451.