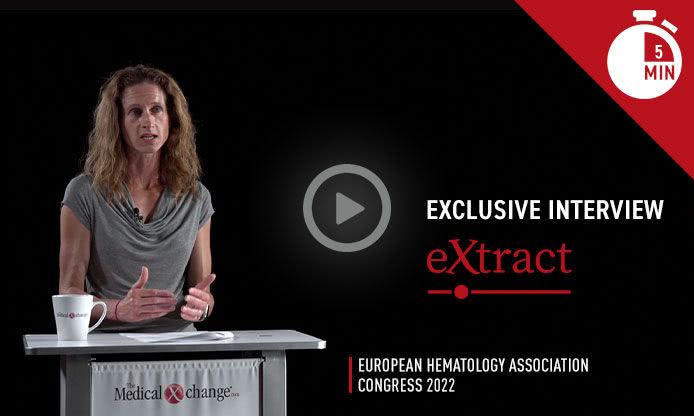 Long-term data from the phase 3 ASPEN trial, a head-to-head comparison of the second-generation BTKi zanubrutinib and the first-generation BTKi ibrutinib for the treatment of WM has shown that the advantage of this newer-generation BTK inhibitor increases over time. When the primary results were published, zanubrutinib was associated with less toxicity and with trends for greater efficacy for several measures relative to ibrutinib (Tam SC et al. Blood 2020;136:2038-2050). These differences have increased in the extended follow-up.

For an exclusive interview with Dr. Carolyn Owen on the impact to clinical practice, click here

WM is a B-cell malignancy characterized by bone marrow infiltration with lymphoplasmacytic cells that secrete immunoglobulin (IgM) antibody, which is a driver of complications. Mutated myeloid differentiation factor 88 (MYD88MUT) is present in most patients with WM. Response in patients with wild-type MYD88 (MYD88WT) have been lower in studies with ibrutinib. CXCR4 mutations, seen in about 30% of patients with WM, also signal a worse prognosis due to greater resistance to treatment. In the long-term follow-up, zanubrutinib performed well in subpopulations with any of these characteristics.

In ASPEN, patients with symptomatic MYD88MUT WM were enrolled at 58 participating centers. Treatment-naïve WM patients were eligible if they were unsuitable for immunochemotherapy. Those with relapsed/refractory disease were required to have had at least one prior line of therapy. Of the 201 patients enrolled in the study, 164 had relapsed/refractory disease and the remaining 37 were treatment-naïve. Treated until progression or intolerance, those randomized to ibrutinib received 420 mg once daily and those randomized to zanubrutinib received 160 mg twice daily. A separate, non-randomized, exploratory arm of ASPEN limited enrollment to WM patients with MYD88WT disease. All received 160 mg of zanubrutinib twice daily until progression. There was no comparative arm as prior studies have demonstrated limited efficacy for ibrutinib in this wild-type patient population.

At the time that the primary results of ASPEN were published, the proportion of patients who achieved a very good partial response (VGPR) was about 50% greater among those randomized to zanubrutinib relative to ibrutinib (28% vs. 19%), which was a strong trend (P=0.09). No patient had achieved a complete response (CR) at the time of this first analysis.

“A consistent trend of deeper, earlier, and more durable complete responses and very good partial responses… were observed over time.”

“Although not statistically significant at the primary analysis, a consistent trend of deeper, earlier, and more durable CR and VGPR compared with ibrutinib were observed over time,” reported Dr. Constantine S. Tam, Director of Hematology, St. Vincent’s Hospital, Melbourne, Australia.

At the time of the most recent analysis undertaken after a median of 44.4 months of follow-up, major response rates (MRR) had increased in both groups, but there was an increasing relative advantage for zanubrutinib, and there was a steadily increasing separation of the curves for PFS, also in favour of zanubrutinib.

At 42 months of follow-up, there was a small and non-significant numerical overall survival (OS) advantage for zanubrutinib (87.5% vs. 85.2%). The 25% risk reduction (HR 0.75, 95% CI 0.36 – 1.59) at the most recent follow-up did not reach significance but the curves for those followed longer than the mean appear to still be separating.

RESPONSES DEEPEN OVER TIME IN PATIENTS WITH MYD88WT

“At 42 months, the event-free PFS and OS rates in the MYD88WT group were 53.8% and 83.9%, respectively,” Dr. Tam reported, a statement pointing to the efficacy of this second-generation BTKi in WM regardless of MYD88 status.

BENEFIT REGARDLESS OF CXCR4 MUTATION STATUS

Among patients stratified by CXCR4 mutation status, there was also a consistent VGPR advantage for zanubrutinib over ibrutinib whether the gene was mutated (21.2% vs. 10.0%) or wild-type (44.6% vs. 30.6%).

All of these advantages are likely drawn from the greater relative selectivity and occupancy of BTK, according to Dr. Tam. In the published initial study, he noted that zanubrutinib was associated with deeper and more sustained reductions of IgM, which has previously been identified as a measure of disease activity. WM is characterized by overproduction of IgM, which might have a role in its pathophysiology. The greater specificity of zanubrutinib relative to ibrutinib for the BTK target is also relevant to safety.

The persistent safety advantage is an equally important part of the story. At the time that the primary results were published, zanubrutinib was associated with lower rates of atrial fibrillation (P=0.005) and hemorrhage (P=0.04) among other adverse events. In the long-term analysis, these relative advantages persisted, providing a difference that is likely to have contributed to more durable disease suppression.

“There were fewer adverse events leading to treatment discontinuation.”

Each difference, including that for hypertension, was statistically significant and is likely explained by the off-target effects associated with ibrutinib on enzymatic pathways other than BTK. For example, the increased risk of atrial fibrillation has been related to inhibition of  C-terminal Src kinase (CSK) (Xiao L et al. Circulation 2020;142:2443-2455).

The long-term ASPEN results demonstrated that the already elevated risk of atrial fibrillation in patients who reach the age where WM becomes common, is further increased over time with ibrutinib. Although rates of atrial fibrillation did increase slowly over time on zanubrutinib, they remained substantially below those of ibrutinib through the course of the follow-up (Figure 3).

“Atrial fibrillation is a well-recognized complication of ibrutinib therapy, and relative to an age-matched controlled population, patients appear to be at a continuously increased risk for the development of atrial fibrillation over the course of therapy,” noted Dr. Tam, referring to experience with this drug in other hematologic malignancies as well as WM.

Over time, “there were fewer adverse events leading to treatment discontinuation, dose reductions, and deaths in the zanubrutinib arm,” Dr. Tam said.

Based on findings from the ASPEN trial, the National Comprehensive Cancer Network (NCCN) updated its most recent guidelines to list zanubrutinib as the preferred BTK therapy for WM. While this designation reflects a more favourable benefit-to-risk ratio, zanubrutinib also has some practical advantages that are relevant to routine patient care. One is versatile dosing. Regulatory approval by Health Canada, the US Food and Drug Administration and others allows for both 160 mg twice daily or 320 mg once daily, allowing treatment to be adapted to the patient’s lifestyle.

Frequency is a practical issue. Twice-daily dosing is acceptable to many patients, particularly those taking other twice-daily therapies, but simpler dosing regimens are often preferable and associated with better compliance. In patients with a serious disease taking treatment indefinitely, well-tolerated therapy with dosing versatility allows patients to attend to daily activities with fewer reminders of their malignancy, a factor that some studies have suggested is relevant to quality of life.

Zanubrutinib also has less drug interactions with common medications compared to some of the other BTK inhibitors, particularly those in older individuals, which is the population most likely to develop WM. In a study of drug interactions, zanubrutinib demonstrated no effect on the pharmacokinetics of agents that are metabolized by the CYP2C9 isoenzyme (Ou YC et al. Br J Clin Pharmacol 2021;87:2926-2936). In this same study, zanubrutinib did decrease systemic exposure to drugs metabolized by CYP3A, but there was no impact seen in its concomitant use with proton pump inhibitors, other anti-acid therapies, and anti-thrombotic agents.

One of the primary conclusions of the long-term follow-up of ASPEN is that the superiority and clinical advantages of zanubrutinib over ibrutinib in WM accumulated over time. This is particularly important in an indolent condition. Median OS after diagnosis of WM is approximately 15 years. While the greater BTK selectivity is likely to play a role in the deepening responses over time, it is equally important to consider safety in a population with the potential for a good quality of life throughout the patient’s disease course.

The long-term results of the phase 3 ASPEN trial, which established zanubrutinib as the preferred therapy for WM in the NCCN guidelines, show that the advantage of the new-generation BTK inhibitor, zanubrutinib, over ibrutinib for both efficacy and safety increases with longer exposure. At the end of almost 4 years of follow-up, responses were faster and deeper on zanubrutinib relative to ibrutinib, and there was a further relative reduction in the risk of cardiotoxicity, particularly new-onset atrial fibrillation. The results support the importance of relative selectivity on the BTK target and establish a standard of care for WM.