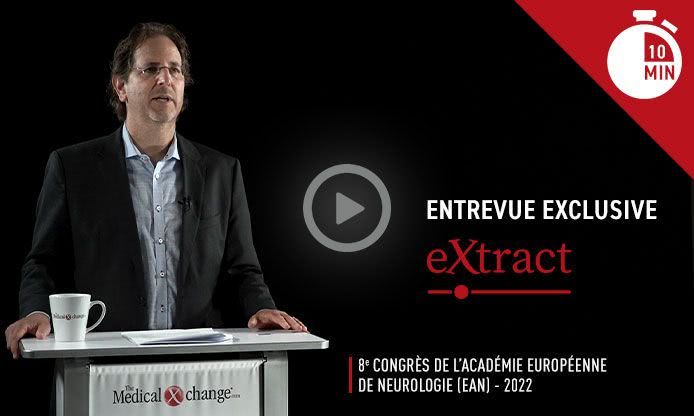 In the multinational APPRAISE trial, presented at the 2022 EAN Congress, those randomized to erenumab, a monoclonal antibody (mAb) that targets the CGRP receptor, were more than 6 times more likely (OR 6.48; P<0.0001) to meet the primary composite endpoint than those randomized to one of the comparator prophylactics.

For an exclusive interview with Dr. Jonathan Gladstone on the impact to clinical practice, click here

To reach the composite primary endpoint, patients were required to complete 12 months of treatment on the initially assigned therapy. The other composite endpoint was a ≥50% reduction in MMD from baseline. For this endpoint, “the superiority of the CGRP antagonist compared with oral preventives was already achieved in the first month of the study,” reported Dr. Raquel Gil-Gouveia, Hospital da Luz Headache Center, Lisbon School of Medicine, Portugal.

The superiority of the CGRP antagonist compared with oral preventives was already achieved in the first month of the study.

The APPRAISE trial enrolled 621 patients at 100 centers in 17 countries. Patients were randomized in a 2:1 ratio to a monthly injection of erenumab or to a daily oral migraine therapy, stratified by prior prophylactic migraine treatment failures (1 or 2) due to efficacy or tolerability. Previous therapy exposures included tricyclic antidepressants, valproate, divalproex, topiramate, flunarizine, and beta blockers.

All secondary endpoints were also met. Due to lack of efficacy, adverse events, and non-compliance, only 37.5% of patients on a conventional SOC oral prophylactic therapy completed 12 months’ initially assigned treatment versus 86.9% of those randomized to erenumab (Figure 1).

In addition to the greater than 6-fold likelihood of meeting the primary composite endpoint, the average reduction in MMD on erenumab was achieved more rapidly and was sustained over the entire course of the trial (Figure 2). Although there was a gradual decline in average MMD in both arms of the study over the course of follow-up, the advantage of erenumab was about a 2-day average reduction at almost all time points.

The control of migraine was reflected in the Patients’ Global Impression of Change (PGIC), a 7-point tool for patient self-assessment. From baseline to end of study, the proportion of patients who were very much improved or much improved was more than 3 times greater with erenumab treatment compared to oral preventives (76.0% vs. 18.8%). A calculation of the odds ratio showed a highly statistically significant relative advantage (OR 13.75; P<0.001).

The greater completion rate of the 12-month study among erenumab patients was largely related to greater efficacy, but there was also a difference in tolerability, according to Dr. Gil-Gouveia.

“The proportion of patients discontinuing treatment due to an adverse event was several times higher in the group receiving SOC oral therapy than in the group randomized to [the CGRP mAb].”

At a rate of 23.3% versus 2.9%, “the proportion of patients discontinuing treatment due to an adverse event was several times higher in the group receiving oral SOC therapy than in the group randomized to erenumab,” she said.

The data from APPRAISE are consistent with a previous head-to-head migraine prevention trial, HER-MES. In that trial, presented in 2021 and published earlier this year (Reuter U et al. Cephalalgia 2022;42:108-118), erenumab was compared to topiramate in patients with a history of at least 4 MMD but no prior exposure to either of the study drugs. Nearly 60% (59.4%) had never received a prior preventive migraine medication. The mean number of MMD at baseline for all enrolled patients was 10.4.

The proportion of patients to achieve a ≥50% reduction in MMD was 55.4% in the arm receiving the CGRP antagonist versus 31.2% in the arm randomized to topiramate. When calculated by odds ratio, the advantage for erenumab approached a 3-fold difference (OR 2.76; P<0.001).

Notably, constipation was not included among adverse events reported with either drug in HER-MES or in APPRAISE. Labeling of erenumab was changed in November 2019 to reflect a post-marketing report of constipation, but the strength of the association remains unclear not only in relation to the absence of this event in both of these randomized studies, but in regard to a new evaluation presented at the 2022 EAN meeting that evaluated rates of inpatient constipation from tm a U.S. medical claims database.

A real-world study called SPECTRE, which is following 556 adult migraine patients at 139 sites in Germany, has provided some practical insights about how erenumab is being used in routine practice. Presented here, the study shows that the degree of response, defined as ≥50% reduction in monthly headache days (MHD) from baseline, climbs steeply with the 3rd and 4th doses. By the sixth dose, 82.6% of patients had achieved this degree of efficacy, reported Dr. Charly Gaul, Neurologist, Headache Center, Frankfurt, Germany  (Figure 4). “Less than 2% of patients required more than 12 injections to achieve a 50% reduction in monthly headache days,” Dr. Gaul reported.

By the sixth dose, 82.6% of patients had achieved at least a 50% reduction in monthly headache days.

Of those enrolled, most (89%) were women and had long-standing disease with a significant symptom burden. The mean number of years since diagnosis was 18.9 and 63.3% met the definition of chronic migraine (≥15 headache days per month). Nearly all of the migraine patients (98.2%) had received prophylactic treatment in the past.

The majority of patients were initiated on erenumab at a dose of 70 mg once per month. Of the 32% who started on 140 mg, about half received the higher dose on the basis of headache severity.

Long-term control in the SPECTRE study was reflected in both physician and patient assessments. After 2 years of therapy, control was labeled by physicians as good or very good in 78% of patients. Most other responses were characterized as adequate. Less than 4% of responses were characterized as poor. Among patients, satisfaction rates as measured with the Treatment Satisfaction Questionnaire for Medication (TSQM) reached 83% at 6 months and remained consistent out to 12 months.

Therapies for migraine have been largely developed on an empirical basis, but erenumab is the first treatment developed to target a specific migraine pathway. This was made possible by a series of preclinical and then clinical trials documenting that CGRP is released from C-type terminations of sensory pain fibers when the trigeminovascular system is activated. CGRP sustains a vicious cycle of pain signals within the central nervous system until aborted (Edvinsson L et al. Nat Rev Neurol 2018;14:338-350).

Erenumab is the first mAb developed to inhibit CGRP. With the completion of two randomized head-to-head trials to evaluate the efficacy of erenumab relative to common oral prophylactic therapies there is now a basis for considering where this therapy fits among other options. The data show that the injectable therapy, which circumvents the challenge of daily compliance to an oral therapy, particularly on days without symptoms, is more effective and better tolerated than conventional SOC options for migraine prevention even if readily available oral drugs might represent a reasonable first-line option.

The APPRAISE trial also supports the use of erenumab early in the algorithm. Although failure on a prior course of at least 1 prophylactic therapy was an entry criterion, patients were excluded if they had been exposed to more than 2 prior therapies. Not only were patients more likely remain on the CGRP inhibitor than any of the oral therapies over 12 months of follow-up, but none of the best performing oral therapies, which included beta blockers, topiramate, and tricyclic antidepressants, approached the efficacy or the rate of long-term retention achieved on erenumab.

APPRAISE, the second of two head-to-head trials for the prevention of migraine, has reaffirmed the highly targeted effect of the CGRP antagonist erenumab. While erenumab appears to be far more effective than conventional oral therapies now used for migraine prophylaxis, the tolerability of this drug and the freedom from daily compliance are also likely to have contributed to very high rates of adherence over the 12-month course of the study. The results are consistent with the recently published HER-MES trial, which also associated erenumab with a large advantage for migraine control as well as a reduced risk of discontinuation even in a more limited timeframe of 6 months.