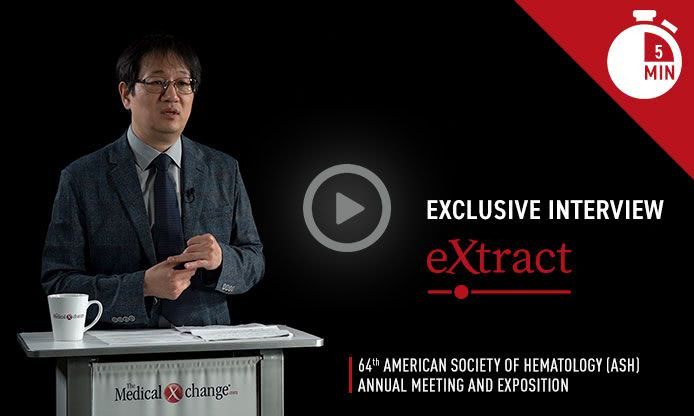 On the basis of a phase 3 trial called ASCEMBL, the first-in-class STAMP inhibitor asciminib was approved last year in Canada for Philadelphia chromosome-positive (Ph+) chronic-phase CML (CML-CP) after failure of at least two tyrosine kinase inhibitors (TKI). In this trial, the major molecular response (MMR) at week 24 was not only approximately two-fold greater on asciminib than on the second-generation TKI bosutinib (25.5% vs. 13.2%), but discontinuations for adverse events (5.8% vs. 21.1%) were nearly 75% lower after a median follow-up of 14.9 months (Réa D et al. Blood 2021;138:2031-2041).

For an exclusive interview with Dr. Dennis Kim on the impact to clinical practice, click here

A new update of ASCEMBL at the 2022 ASH meeting was based on 2 years of follow-up and showed that responses deepened over time on continued treatment with asciminib. For example, of patients in the asciminib arm with BCR::ABL ≤1% at 24 weeks, 22.2% achieved this level of response at 1 year and 38.9% at 2 years if they remained on therapy, according to Dr. Timothy P. Hughes, Head of the Department of Hematology, Royal Adelaide Hospital, Australia (Figure 1).

In a population of TKI failures, “these results demonstrate that patients who continued asciminib therapy have a considerable probability of achieving MMR at a later timepoint. The efficacy of asciminib after treatment failure on second⁠-⁠generation TKIs support this as a new standard of care,” Dr. Hughes said.

“These results demonstrate that patients… have a considerable probability of achieving MMR.”

The first-generation TKI imatinib and then the second-generation TKIs, such as nilotinib and dasatinib, dramatically improved the prognosis of CML. These oral agents inhibit several signalling pathways associated with CML progression, particularly BCR::ABL1, with which they compete at ATP binding sites. Asciminib is a first-in-class allosteric inhibitor of BCR::ABL1, specifically targeting the ABL myristoyl pocket (STAMP) instead of the ATP-binding pocket. Clinical studies have validated laboratory evidence that this site of binding minimizes off-target effects while avoiding causes of TKI resistance.

In the ASCEMBL trial, 233 highly treatment-experienced CML patients were randomized to 40 mg twice daily of asciminib or 500 mg once daily of bosutinib. In addition to the higher rates of MMR, a complete cytogenic response (CCyR) rate at week 24 for those who entered the study without CCyR was 40.8% in the asciminib arm and 24.2% with bosutinib. Among patients with mutations identified at baseline (excluding those with T315I or V299L mutations), 6 (35%) of 17 patients on asciminib versus 2 (25%) of 8 patients in the bosutinib arm achieved MMR.

Benefit Regardless of Prior TKI Therapy

In the updated ASCEMBL analysis presented here, responses were stratified according to last TKI treatment before entering the trial. With very few exceptions, the advantage of asciminib over bosutinib for achieving BCR::ABL1 ≤1% among patients who entered the study with BCR::ABL >1% was observed whether failure to the last TKI was due to resistance or intolerance. For example, BCR::ABL1 ≤1% among patients who had previously failed dasatinib due to resistance was 43.6% among patients in the asciminib arm and 6.9% in the bosutinib arm. For dasatinib failures due to intolerance, the rates were 52.0% and 28.6%, respectively.

Of exceptions, while asciminib did show an advantage over bosutinib for patients who failed nilotinib due to intolerance (66.7% vs. 40.0%) it did not in those who failed nilotinib due to resistance (38.7% vs. 50%). Asciminib showed an advantage over bosutinib in patients whose last TKI was imatinib whether the failure was due to resistance (50.0% vs. 20.0%) or intolerance (71.4% vs. 0%).

The evidence of a deepening response over time in the new analyses of the ASCEMBL trial was joined by two prospective studies evaluating asciminib at earlier stages of disease. In a phase 2 study called ASCEND-CML, which was also presented at ASH by Dr. Hughes, 100 newly diagnosed CML patients from 15 centers in Australia and New Zealand have been enrolled. The study evaluated asciminib as a first-line therapy.

In ASCEND-CML, all patients are receiving 40 mg asciminib twice daily. Efficacy is being assessed by hitting BCR::ABL1 targets defined by the European LeukemiaNet (ELN) guidelines. These are BCR::ACL1 levels of ≤10% at 3 months, ≤1% at 6 months, and ≤0.1% at 12 months. Failure of treatment at 3 or 6 months is being defined as BCR::ABL1 >10%. Failure at 12 or 18 months is being defined as BCR::ABL >1%. If patients fail, they will remain on asciminib, but a TKI is added according to physician preference. If patients do not meet the ELN targets at any timepoint but have not met the definition of failure, their dose of asciminib is increased to 80 mg twice daily.

Some patients have received an asciminib dose escalation according to protocol, but follow-up is not sufficient to estimate the frequency with which this is needed. So far, no patient has met the definition of failure and triggered initiation of an add⁠-⁠on TKI.

The interest in asciminib in first-line treatment is derived from the minority of CML patients with primary resistance to TKI therapy or who do not tolerate drugs in this class, according to Dr. Hughes. In ASCEND-CML, no resistance to asciminib was observed and safety was encouraging. Grade ≥3 adverse events included thrombocytopenia (5.4%), neutropenia (6.5%), anemia (2.2%) and lipase abnormalities (6.5%). The discontinuations due to an adverse event, all occurring within the first 3 months on treatment, were for lipase or amylase elevations in 3 patients and thrombocytopenia in 1 patient.

“The cytopenias and lipase elevations might be an ABL1 inhibitor class effect, but there were no vascular occlusive events observed so far,” said Dr. Hughes, who reported that extended follow-up is planned.

Goal Is to Increase DMR Rates at 5 Years

In yet another potential application of asciminib in CML, a randomized study called ASC4MORE tested strategies for increasing the rates of deep molecular response (DMR) in patients initiated on imatinib that included adding the STAMP inhibitor or switching to nilotinib. Four strategies were evaluated in total with a 1:1:1:1 randomization. The primary endpoint was MR4/5, or DMR, at 48 weeks.

“We know that more patients are able to achieve a DMR on the second-generation TKIs than imatinib, but 30% to 60% of patients treated with a second-generation TKI do not ever achieve a DMR even after 5 years of therapy,” explained Dr. Jorge Cortes, Director of the Georgia Cancer Center, Augusta, Georgia. He suggested that there is an unmet need for “safe and effective treatment options in early lines of treatment to bring more patients to a durable DMR.”

“30% to 60% of patients treated with a second-generation TKI do not ever achieve a DMR even after 5 years of therapy.”

Relative to remaining on 400 mg imatinib monotherapy, all three of the alternative regimens were associated with a greater rate of adverse events, but both add-on arms of asciminib were associated with a lower rate of grade ≥3 adverse events than nilotinib and a lower rate of discontinuations (Figure 4). At the time of data cutoff, 85.7% of those in the 40 mg add⁠-⁠on arm and 76.2% of those in the 60 mg add-on arm remained on therapy versus 61.9% of those switched to nilotinib and 23.8% of those maintained on imatinib monotherapy.

“With greater median durations of exposure, add-on therapy with asciminib led to fewer serious adverse events and discontinuations due to adverse events than nilotinib,” reported Dr. Cortes, noting that tolerability is meaningful to quality of life and also for maintaining patients on treatment.

“This study was not powered to identify the best arm for achieving DMR in those with an inadequate response to imatinib, but the high rate of DMR in the asciminib add-on arms is promising, particularly when employed in a population that had not achieved DMR after at least one year on the first-line TKI,” Dr. Cortes reported.

“The high rate of DMR in the [STAMP inhibitor] add-on arms is promising, particularly in a population that had not achieved DMR after 1 year on the first-line TKI.”

The ASC4MORE study investigators are now planning to add an asciminib monotherapy arm to this study, but Dr. Cortes noted that much more will be learned about the potential of a STAMP inhibitor as a first-line therapy in CML with two ongoing studies, the ASC4FIRST and ASC4START trials. Both are evaluating the STAMP inhibitor in the first-line setting and will include efficacy endpoints, but the ASC4START trial, which is randomizing newly-diagnosed Ph+ CML-CP patients to asciminib or nilotinib, is focused on tolerability. The primary outcome of this trial is the time to study discontinuation due to an adverse event.

“The CML treatment landscape is evolving. While treatment-free remission is the ultimate goal, providing disease control with an acceptable quality of life is also something that we can now consider with a growing range of treatment options,” Dr. Cortes said.

Asciminib, a novel first-in-class therapy, is now available for third-line treatment of CML, with the unique features of this agent showing promise for earlier intervention. The therapy is highly targeted at BCR::ABL1 with a binding site that appears to render it less susceptible to resistance, but it might have greater potency than even second-generation TKIs for achieving a rapid MMR, which is known to be prognostically important. Ongoing trials will determine where this agent fits among other options in strategies to quickly achieve and then maintain a DMR.