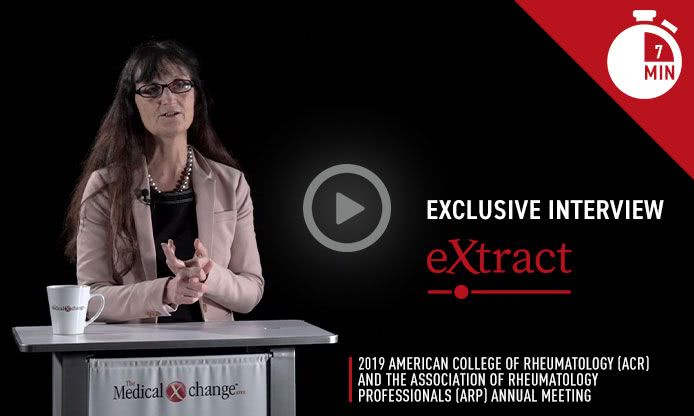 The head-to-head trial was conducted with upadacitinib, a novel JAK inhibitor recently approved in the United States and adalimumab, a biologic. Called SELECT-COMPARE, the trial is part of an extensive phase 3 upadacitinib program that was updated at the 2019 ACR/ARP meeting. At 48 weeks, the advantage of upadacitinib over adalimumab when patients in both groups remained on stable doses of methotrexate was observed across multiple clinical endpoints, according to the principal investigator, Dr. Roy Fleischmann, University of Texas Southwestern School of Medicine, Dallas.

For an exclusive interview with Dr. Janet Pope on the impact to clinical practice, click here

In SELECT-COMPARE, 1629 patients who met criteria for a high risk of progressive disease were randomized in a 2:2:1 ratio to 15 mg upadacitinib once daily, 40 mg adalimumab every other week, or placebo for the initial 26-week analysis. All patients were maintained on stable background methotrexate therapy.

The JAK inhibitor demonstrated significantly better clinical and functional responses compared to a biologic when both were combined with methotrexate.

The 26-week data, showing greater control with upadacitinib, have been published (Fleischmann R et al. Arthritis Rheumatol 2019;11:1788-1800). The newly-presented 48-week analysis, during which treatment allocation remained double blind, was part of the original design. The results at 48 weeks were remarkably similar to those reported at 26 weeks. Upadacitinib provided significantly better outcomes for every measure employed in the study, including ACR20, ACR50, ACR70, DAS28(CRP) <2.6, DAS28(CRP) ≤3.2, CDAI ≤10, CDAI ≤2.6, SDAI≤3.3, and HAQ-DI.

While many of the differences between the active treatment arms were already significant by 12 weeks, the 48-week data show no diminution in the relative advantage of upadacitinib over adalimumab through the time of the most recent follow-up. All of the differences between the agents that were statistically significant at week 26, such as ACR70, DAS28(CRP) <2.6, and ACR50, remained so at week 48 (Figure 1), (Figure 2).

For each of the major outcomes, the relative advantage of upadacitinib over adalimumab was remarkably similar, supporting a more profound and durable anti-inflammatory effect (Figure 3).

Although there were differences in the relative safety profile of upadacitinib and adalimumab, the proportion of patients with a serious adverse event (12.9% vs. 15.6%) or an adverse event leading to discontinuation of therapy (7.4% vs. 11.1%) was lower at 48 weeks in the group randomized to upadacitinib. The proportion of patients who developed herpes zoster was higher on the JAK inhibitor than the biologic (3.1% vs. 1.3%), but the rate of venous thromboembolism (VTE) was lower (0.3 vs. 1.1).

In addition to the standard measures of inflammatory activity, such as DAS28(CRP) <2.6 and CDAI ≤10, the patient experience on upadacitinib was superior to that of adalimumab as captured with HAQ-DI and pain scores. For HAQ-DI, a significant advantage for upadacitinib over adalimumab was achieved by week eight. On a statistical basis, the persistent advantage at week 48 was equivalent to that observed at week 26  (Figure 4). For patient-reported pain, the advantage of upadacitinib had reached significance by week 4. Again, the degree of the relative advantage was similar at weeks 26 and 48, relative advantage for upadacitinib.

Radiographic comparisons for progression of structural damage between the two active treatment arms were not performed, but upadacitinib was compared to placebo. According to Dr. Fleischmann, “The significant inhibition of structural joint damage with 15 mg upadacitinib versus placebo observed at week 26 was maintained through 48 weeks.

The head-to-head comparison is potentially relevant to selection of the next-step therapy when RA patients on conventional synthetic disease modifying anti-rheumatic drugs (csDMARDs) are inadequately controlled. Although SELECT-COMPARE is the first multicenter trial to show a significant advantage for a JAK inhibitor at a standard dose over a biologic, it is not the first head-to-head comparison. Both tofacitinib, the first approved JAK inhibitor, and baricitinib have been compared to adalimumab in randomized placebo-controlled trials with a similar design.

In the tofacitinib trial, 717 patients were randomized to one of two doses (5 mg or 10 mg twice daily), adalimumab, or placebo (van Vollenhoven R et al. N Engl J Med 2012;367:508-519). As in SELECT-COMPARE, all patients were maintained on stable background methotrexate therapy. On the three primary outcome measures of ACR20, HAQ-DI, and DAS28(CRP) <2.6, all three active treatment arms outperformed placebo at six months, but they did not differ significantly from each other.

In the baricitinib trial, 1307 patients were randomized to 4 mg baricitinib once daily, adalimumab or placebo (Taylor PC et al. N Engl J Med 2017;376:652-662). On the primary endpoint of ACR20 response at week 12, the 4 mg dose of baricitinib did achieve a statistical advantage over adalimumab (70% vs. 61%; P=0.014), but the study dose is higher than the one licensed for RA treatment in Canada. Moreover, the differences for ACR20 were not significant at weeks 16 or 32.

There are a number of reasons why the clinical activity of JAK inhibitors might differ, but there is particular interest in determining whether JAK selectivity is meaningful. Of the four JAK transduction pathways, JAK1, JAK2, JAK3, and Tyk2, JAK 1 has been the most strongly implicated in pro-inflammatory activity. Relative to tofacitinib, which is considered a pan-JAK inhibitor, both upadacitinib and baricitinib exhibit greater selectivity for JAK1 than JAK3 in the experimental setting. Baricitinib but not upadacitinib has similar selectivity for JAK2. The potential of these differences in selectivity to affect the benefit-to-risk ratio for treatment of RA is currently being evaluated.

“At least in the treatment of RA, there is no evidence that a higher dose provides better outcomes,” explained Dr. Gerd R. Burmester, Charité University Hospital, Berlin, Germany. Senior author of the updated SELECT-NEXT trial, which initially compared 15 mg upadacitinib, 30 mg upadacitinib, and placebo over 12 weeks in patients inadequately responding to csDMARDs, Dr. Burmester presented data here from the blinded extension at 60 weeks.

Of the 661 patients enrolled initially in SELECT-NEXT, 618 were enrolled in the extension. At this time point, those on placebo were switched to one of the upadacitinib arms. Across multiple outcomes, high rates of response were maintained at week 60. These responses were similar for those who switched from placebo to active treatment when compared to those who were initially randomized to either 15 mg or 30 mg upadacitinib. For example, ACR50 was achieved by approximately 70% of patients in the 15 mg and 30 mg upadacitinib arms, regardless of whether they started or switched to the active therapy.

The 15 mg dose “makes more sense if there is no greater efficacy with the higher dose.”

“There was a slightly higher rate of discontinuation in the 30-mg group, but no significant differences in the adverse events leading to discontinuation,” Dr. Burmester said. Although the 30 mg dose was well tolerated, he explained that the 15 mg dose “makes more sense if there is no greater efficacy with the higher dose.”

This experience has been different from that of tofacitinib and baricitinib, which have each been associated with greater efficacy but more adverse events at higher doses.

The degree to which VTE risk increased over the already elevated background VTE risk in RA patients, if any, remains unproven for these specific drugs and for JAK inhibitors in general. In a large database with more than 30,000 RA patients, VTE risk was numerically elevated but not significantly different in patients receiving tofacitinib relative to a TNF inhibitor (Desai RJ et al. Arthritis Rheumatol 2019;781:892-900). In pooled data of nine studies of baricitinib in RA patients, long-term incidence rates of VTE and major adverse cardiovascular events (MACE) were not different from rates previously reported in RA patients (Taylor PC et al. Arthritis Rheumatol 2019;71:1042-1055.

The [VTE and MACE] event rates were comparable… and consistent with previously reported background rates in the RA population.

At the 2019 ACR/ARP meeting, data pooled from the SELECT phase 3 program with upadacitinib showed no signal for an increased risk of VTE or MACE over that observed in placebo, even when confined to those receiving the higher 30 mg dose. This not only included data analysis from SELECT-NEXT and SELECT-BEYOND, which also has data out to 60 weeks, but three additional studies.

“The event rates were comparable in the active treatment and placebo arms and consistent with previously-reported background rates in the RA population,” reported Dr. Ernest Choy, Cardiff University School of Medicine, UK. When the rates of VTE and MACE were compared for upadacitinib 15 mg, upadacitinib 30 mg, placebo, and adalimumab, confidence intervals fully overlapped.

Differences, if any, between therapies within classes of small molecular inhibitors and biologics or across these classes is unknown. The lack of any signal even at the higher dose of upadacitinib is reassuring as this issue is further investigated.

JAK inhibitors are now widely used before biologics in RA patients inadequately controlled on csDMARDs, mainly because of the preference for an oral agent. Although past studies have suggested they are as effective as a biologic, upadacitinib is the first agent in this class to demonstrate greater efficacy against multiple endpoints through 48 weeks. If approved in Canada, upadacitinib is expected to be an important addition to treatment options for advanced RA.