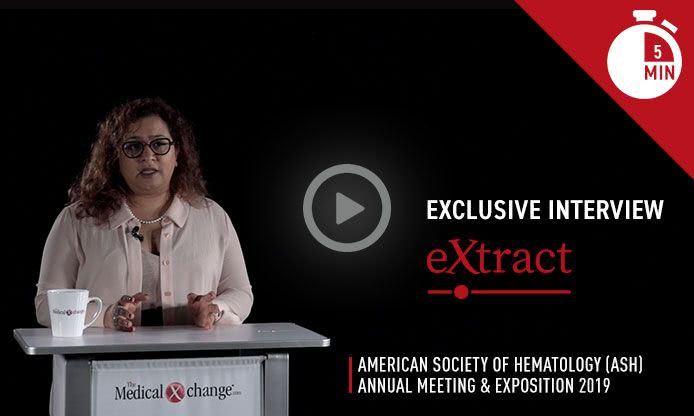 Compared to the first-generation BTK inhibitor ibrutinib, the clinical advantage of acalabrutinib is predicted on the greater selectivity for the BTK target, which has implications for a greater therapeutic effect with less off-target activation of other kinases. In the frontline phase III study, called ELEVATE-TN, acalabrutinib plus the anti-CD20 monoclonal antibody obinutuzumab was compared to the standard of obinutuzumab and chlorambucil. In a third study arm, patients received acalabrutinib monotherapy.

The trial met its progression-free survival (PFS) endpoint, associating both arms of acalabrutinib with statistically significant reductions in progression or death relative to the chemotherapy standard (Figure 1).

“The relative PFS benefit of acalabrutinib with or without obinutuzumab was consistent across subgroups and irrespective of high-risk characteristics,” reported Dr. Jeff P. Sharman, Director of Research, Willamette Valley Cancer Institute, Eugene, Oregon.

“The relative PFS benefit of acalabrutinib with or without obinutuzumab was consistent across subgroups and irrespective of high-risk characteristics.”

Despite a trial design that allowed patients in the control group to crossover to acalabrutinib, there was a promising trend for an overall survival (OS) benefit even after a median follow up of only 28.3 months (Figure 2). The estimated 30-month survival rates for the acalabrutinib combination, acalabrutinib monotherapy and chlorambucil/obinutuzumab arms were 95%, 94% and 90%, respectively.

In ELEVATE-TN, 535 patients with previously-untreated CLL were randomized to acalabrutinib/obinutuzumab, acalabrutinib monotherapy, or chlorambucil/obinutuzumab, a standard frontline CLL regimen that has been employed in other recent frontline CLL trials. After a median follow up of 28.3 months, the median PFS had not been reached among patients randomized to acalabrutinib/obinutuzumab versus 22.6 months for the obinutuzumab/chlorambucil arm. This translated into a 90% reduction (HR 0.10; P<0.0001) in progression or death relative to chlorambucil/obinutuzumab, according to Dr. Sharman. The monotherapy arm was associated with an 80% PFS improvement (HR 0.20; P<0.0001) relative to the chemotherapy-containing regimens. It is unclear if these relative advantages over the control arm are different.

“The study was not powered or designed to compare the two acalabrutinib arms for the PFS endpoint,” cautioned Dr. Sharman. As a result, the clinical difference, if any, remains unknown, but the trial arm does show a high degree of activity for acalabrutinib with or without obinutuzumab. The role of acalabrutinib monotherapy is relevant to patient convenience as well as cost and is likely to be explored in future studies.

“The combination of acalabrutinib plus obinutuzumab was associated with a 90% reduction in the risk of progression or death.”

Each of these trials associated the experimental therapy with a statistically significant PFS advantage over standard chemotherapy, providing a large body of evidence supporting chemotherapy-free regimens in frontline CLL (Table 1). Without a direct comparison, the significance of the greater relative advantage of either acalabrutinib arm over chemotherapy in the ELEVATE-TN study relative to the other two recent trials is unknown.

For grade 3 or higher neutropenia, which was the most common adverse event in all three arms, the rates were 29.9%, 9.5% and 41.4%, for the acalabrutinib/obinutuzumab, acalabrutinib monotherapy and chlorambucil/obinutuzumab arms, respectively. Headache, diarrhea, and arthralgia were more common in the arms with acalabrutinib, but most were of modest grade. The incidence of grade 3 or higher headache (1.1%, 1.1% and 0%), diarrhea (4.5% 0.5% and 1.8), and arthralgia (1.1%, 0.6% and 1.2%) varied modestly for the three study arms, respectively.

However, the relative risk of these adverse events should be considered in the context of relative exposures, according to Dr. Sharman. The median treatment duration was 27.7 months in the acalabrutinib/obinutuzumab arm, with some patients treated as long as 40.2 months. In the chemotherapy-containing arm, the median duration was just 5.6 months. The majority of patients in both of the acalabrutinib arms remained on treatment at the time that the study blind was lifted.

By independent review committee analysis, the objective response rate (ORR) in the acalabrutinib combination arm was 93.9%, including a 13% complete response (CR) rate. In the monotherapy arm, the ORR reached 85.5%. The 78.5% ORR rate in the chlorambucil/obinutuzumab arm contained a lower proportion of CRs and was significantly inferior to the acalabrutinib combination arm (P<0.001).

Benefit is Consistent across Subgroups

Whether alone or in combination with obinutuzumab, acalabrutinib was consistently favored over the chlorambucil/obinutuzumab in an array of distinct pre-specified subgroups, as displayed by a forest plot presented by Dr. Sharman. These included disease bulk at baseline, high-risk cytogenetics, and karyotype. The median age in this study was 70 years, but the benefit was similar for patients younger than 65 years when compared to older patients. The relative benefit of acalabrutinib was consistent in those with or without adverse genetics. For example, acalabrutinib/obinutuzumab provided an estimated 87% PFS advantage (HR 0.13) over the chemotherapy-containing regimen for patients with del(17p) CLL.

“In contrast to some recent studies, acalabrutinib yielded an overall PFS benefit compared to controls in both mutated and unmutated IgVH.”

The results with acalabrutinib in the frontline setting of CLL follow only months behind the data from a phase 3 trial in relapsed/refractory CLL. The study, called ASCEND, was presented at the 2019 European Hematology Association Congress. In that study, an oral 100 mg dose of acalabrutinib alone, which is the same dose employed in both of the experimental arms of the ELEVATE-TN trial, was compared to an investigators’ choice of rituximab in combination with either the phosphoinositide 3-kinase inhibitor idelalisib or bendamustine.

The median age of the 310 patients enrolled in this study was 67. About 40% of patients had adverse cytogenetics. The median number of prior therapies was one, but enrolled patients had been exposed to up to eight prior lines of treatment.

The PFS rates at 12 months in ASCEND were 88% in the group randomized to the oral acalabrutinib monotherapy versus 68% in those on either of the control combinations which translated into a 69% relative protection against progression or death (HR 0.31; P<0.0001) (Figure 3). Again, despite a design that permitted crossovers, which was undertaken by 23% of the patients initially randomized to the control arm, PFS rates (88% vs. 68%) and OS rates (94% vs. 91%) were higher at 12 months in the acalabrutinib arm.

In the relapsed/refractory CLL setting, acalabrutinib was superior to the control arms across all subgroups, including those defined by adverse cytogenetics.

As in the ELEVATE-TN trial, the relative PFS improvement for acalabrutinib in ASCEND was consistent across all subgroups, including those defined by adverse cytogenetics or risk factors, such as TP53 mutations and Rai stage of III or higher, according to the principal investigator, Dr. Paolo Ghia, Director of the Strategy Research Program on CLL, University Vita-Salute San Raffaele, Milan, Italy.

For targeted agents like acalabrutinib, relative selectivity is potentially important for both efficacy and safety. Several other selective BTK inhibitors, including zanubrutinib and loxo-305, have also reached clinical development. Early data with each of these agents presented at the 2019 ASH meeting were consistent with the premise that BTK selectivity has the potential to improve tolerability as well as efficacy in the treatment of both early and late stage CLL.

“Acalabrutinib is a highly selective, covalent irreversible BTK inhibitor with minimal activity against other kinases,” Dr. Sharman reported. He suggested that the durable responses observed in both the treatment-naïve and relapsed/refractory settings support its value as a new therapeutic option.

The phase 3 data for acalabrutinib in treatment-naïve CLL were presented at the 2019 ASH just weeks after the FDA granted approval in this setting and in relapsed/refractory CLL. In ELEVATE-TN, the treatment-naïve CLL study, the relative protection against progression or death was higher than that observed against the same standard therapy than in prior phase 3 trials with the first generation BTK inhibitor ibrutinib or the BCL-2 inhibitor venetoclax. In ASCEND, the phase 3 trial conducted in patients with relapsed/refractory CLL, the oral therapy was better tolerated and more effective than commonly-used standards. Overall, the data support an important new option in the treatment of CLL.