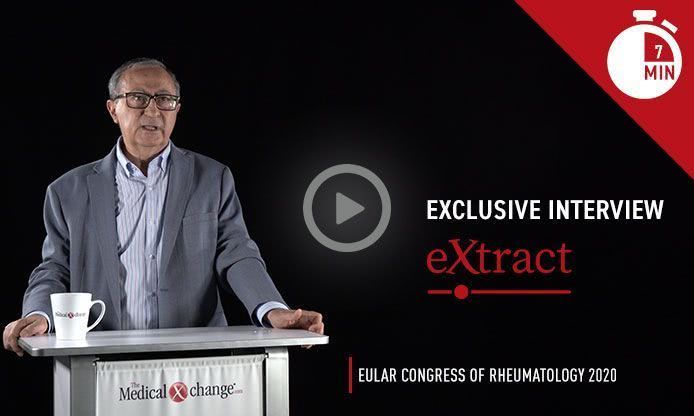 Relative to tofacitinib, a first-generation JAK inhibitor, newer agents in this class have been engineered for greater selectivity at the JAK enzyme subtype most closely associated with RA activity. In Canada, approvals were recently granted to two of these agents, upadacitinib and baricitinib. Of the two, upadacitinib is alone in demonstrating greater efficacy against the tumor necrosis factor (TNF) inhibitor adalimumab when administered at its approved dose. Now, in a new trial, it has also been found superior to abatacept, which inhibits T cell activation.

For an exclusive interview with Dr. Boulos Haroui on the impact to clinical practice, click here

The new comparative study, called SELECT-CHOICE, enrolled RA patients who had failed or were intolerant to at least one biologic disease-modifying anti-rheumatic drug (bDMARD). The 612 participants were randomized to the approved 15 mg dose of oral upadacitinib once daily or intravenous (IV) abatacept administered at standard dosing intervals. The primary endpoint was change in the disease activity score for 28-joints (DAS28[CRP]) at Week 12.

The trial was designed as a non-inferiority comparison, however, the proportion of patients who achieved DAS28(CRP) <2.6 was more than twice as high at Week 12 in the group receiving oral upadacitinib (30% vs. 13.3%; P<0.001) (Figure 1). This crossed the predefined boundary for superiority, according to Dr. Andrea Rubbert-Roth, Division of Rheumatology, Cantonal Clinic St. Gallen, Switzerland.

According to Dr. Rubbert-Roth, by demonstrating superiority for the 15 mg dose of upadacitinib to a biologic, this study adds information on the benefit-to-risk profile.

By demonstrating superiority for the 15-mg dose of upadacitinib to a biologic, this study adds information on the benefit-to-risk profile.

The advantage on the primary outcome was reflected in numerous other measures of clinical benefit. On the endpoints of Clinical Disease Activity Index (CDAI) ≤2.8 and Simplified Disease Activity Index (SDAI) ≤3.3, the significant advantage of upadacitinib at Week 12 (P<0.01) persisted through Week 24. There was also a significantly greater proportion of patients who achieved ACR50 and ACR70 with upadacitinib over abatacept at Weeks 12 and 24 (Figure 2).

Pain relief was faster on upadacitinib than abatacept, reaching significance by Week 2 and remaining significant through Week 12. On the physical domain of the SF-36 quality of life instrument, the advantage reached at Week 12 (P<0.001) remained significant at Week 24 (P=0.02). At Week 12, the relative advantage of upadacitinib in achieving at least a 0.22 improvement in the Health Assessment Questionnaire – Disability Index (HAQ-DI) was significant at Week 12 (P<0.01).

There are still relatively few head-to-head comparisons of targeted therapies for control of moderate-to-severe RA, but a previous study, called SELECT-COMPARE, also showed superiority of upadacitinib to adalimumab at Week 48 when both were combined with methotrexate (Fleischmann RM et al. Ann Rheum Dis 2019;78:1454-1462). In the long-term extension of that trial presented at the 2020 EULAR eCongress, the relative advantage is still persisting.

“Through Week 72, a significantly higher proportion of patients on upadacitinib than adalimumab achieved a sustained clinical remission.”

“Through Week 72, a significantly higher proportion of patients [P=0.004] receiving upadacitinib plus methotrexate versus adalimumab plus methotrexate achieved a sustained clinical remission when measured with the CDAI ≤2.8,” reported Dr. Peter Nash, Griffith University, Brisbane, Australia. The same was true in data after 72 weeks for low disease activity, whether defined as DAS28(CRP) <2.6 or ≤3.2 (both P<0.001).

During the first 48 weeks of the study, the proportion of patients achieving a response was higher in the upadacitinib group across any of the endpoints measured, but the longer follow-up also showed a higher sustained response. For example, 74.3% of upadacitinib versus 58.4% of adalimumab patients achieved DAS28(CRP) ≤3.2 during the trial, but the proportion who sustained this response, although it diminished over time in both groups, was consistently greater in the upadacitinib group over the next 12 months (Figure 3).

The advantage of upadacitinib over a TNF inhibitor has not been observed in other head-to-head comparisons with a JAK inhibitor at the approved dose in Canada. When tofacitinib was compared to adalimumab, both active therapies were superior to placebo but did not differ significantly from each other for any of three primary endpoints (van Vollenhoven RF et al. N Engl J Med 2012;367:508-519). When baricitinib was compared to adalimumab, superiority in the baricitinib group was reached for ACR20 (P=0.014), but the study dose was 4 mg (Taylor PC et al. N Engl J Med 2017;376:652-662). This is twice the daily dose currently approved for RA in Canada.

While the 72-week SELECT-COMPARE data further support upadacitinib as a option in patients with an inadequate response to conventional synthetic DMARD (csDMARD) therapies, the SELECT-CHOICE trial identifies this agent as a viable option for patients refractory or intolerant to bDMARDs. With limited comparative data in either setting, these findings provide objective data for guiding choices.

In these experiences and in the phase 3 development overall, upadacitinib has been associated with a low and acceptable rate of adverse events, according to the safety data from each of the trials. In SELECT-CHOICE, the rate of serious infections (1.0% vs. 0.3%) and opportunistic infections (1.3% vs. 0.3%) were higher in the upadacitinib group than on abatacept, but rates were low in both groups. The rate of herpes zoster, at 1.3%, was the same in both groups. The rate at which therapy was discontinued for side effects was higher on upadacitinib (4.6% vs. 2.9%) but less than 5% in either group.

The 72-week data from the long-term extension of the SELECT-COMPARE trial generated similar results. Expressed as treatment-emergent adverse events per 100 patient years (PY) of follow-up, serious infections (3.7 vs. 4.3) were slightly lower but opportunistic infections (0.9 vs. 0.6) were slightly higher on upadacitinib relative to adalimumab. The rates of malignancy (0.4 vs. 0.8), major adverse cardiac events (MACE: 0.4 vs. 0.6) and venous thromboembolism (VTE: 0.3 vs. 1.0) were numerically lower in the upadacitinib treatment arm but, again, low in both groups.

Approval of both upadacitinib and baricitinib in Canada were granted on the basis of an acceptable level of safety in controlled trials, but a vast array of new safety data presented on upadacitinib at the EULAR 2020 eCongress permitted detailed analysis of several specific safety issues, such as the potential link to VTE, that arose during clinical development. In addition, data collected over a longer term has become available to assess risk of late effects in patients on chronic treatment.

The most significant safety analysis was generated by data pooled from five randomized trials. In addition to SELECT-COMPARE, these included two trials of upadacitinib as a monotherapy (SELECT-EARLY and SELECT-MONOTHERAPY) and two trials of upadacitinib in combination with csDMARDs (SELECT-NEXT and SELECT-BEYOND). In these trials, patients have now been followed for up to three years. Several of these trials evaluated a 30 mg dose of upadacitinib, which has not been brought forward, but the data on the higher dose broadened the opportunity to look for adverse events related to exposure.

“Our updated analysis at three years was comparable to previous analyses. There were no new safety risks identified.”

As reported previously in trials that included both a 15-mg arm and a 30-mg arm, the higher dose of upadacitinib is associated with a higher risk of serious and opportunistic infections, but these were not different when the 15-mg dose was compared to methotrexate monotherapy or adalimumab plus methotrexate in the pooled data. In addition, Dr. Burmester reported that a detailed analysis of the types of serious infections “were consistent with that anticipated in a RA population.”

No Elevation in VTE Rates Observed

In this pooled analysis there were similar rates of VTE and MACE among those treated with upadacitinib, adalimumab, or methotrexate, but a separate more detailed analysis of VTE rates was conducted after case reports suggested VTE risk might be higher in patients exposed to JAK inhibitors. Looking at the same set of five trials using exposure-adjusted event rates (EAER) to compare rates across the study arms, the EAER per 100 PY were 0.3, 0.4, 0.5, and 0.5 for the 30-mg upadacitinib, methotrexate, 15-mg upadacitinib, and adalimumab arms, respectively (Figure 4).

“The VTE event rates appeared balanced across the upadacitinib doses and active comparator groups,” reported Dr. Ernest Choy, CREATE Centre, Cardiff University, Cardiff, UK. Not surprisingly, history of VTE and a relatively high body mass index were found to be predictors of VTE, but the proportions of patients with these risk factors were not different across the different treatment groups.

There were adverse events more common on the 15 mg dose of upadacitinib than active comparators in the pooled analysis, but these had an uncertain clinical significance. For example, creatine phosphokinase (CPK) levels were increased relative to the other active comparators as were some cytopenias, such as lymphopenia. These were not linked to serious clinical events. According to Dr. Burmester, ongoing follow-up and post-marketing safety studies will permit relative risks to be explored further, but the data are reassuring.

Recently approved in Canada, upadacitinib is the first selective oral JAK inhibitor to show clinical superiority to adalimumab in patients with moderate-to-severe RA uncontrolled on csDMARDs and to abatacept in patients uncontrolled or intolerant to bDMARDs. It appears to be a versatile option with an activity at least commensurate with the injectable agents. With follow-up out to three years, the safety and tolerability profile remains unchanged from the pivotal phase 3 trials. The data support the applicability of this agent as a convenient and acceptably tolerated option for the patient populations in which it has been studied.