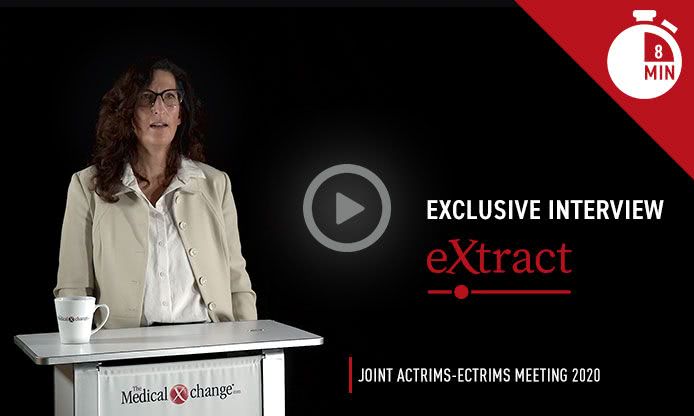 In patients with RMS, moving earlier to high-efficacy disease-modifying treatments has been an increasingly common strategy in those with highly-active disease. New data suggests that this approach can be employed first-line. In a substudy of the recently-published multinational ASCLEPIOS I and II trials, the advantage of the targeted monoclonal antibody ofatumumab over the immunomodulator teriflunomide was large for major efficacy endpoints in the treatment-naïve subgroup. The advantages mirrored those seen in the overall population.

For an exclusive interview with Dr. Heather MacLean on the impact to clinical practice, click here

The ASCLEPIOS I and II trials were published together in August (Hauser SL et al. N Engl J Med 2020;383:546-557). The identically-designed trials compared the anti-CD20 monoclonal antibody ofatumumab, which is self injected every four weeks, to teriflunomide which appears to inhibit MS through an anti-inflammatory effect. In these two trials, the monoclonal antibody ofatumumab was associated with large efficacy advantages over the immunomodulator teriflunomide. A newly-released substudy demonstrates that these advantages for ofatumumab relative to teriflunomide were at least as great in the subgroup of patients who were newly diagnosed and treatment-naïve.

In the overall trial data, relapse activity measured with annualized relapse rate (ARR), which was the primary endpoint, was reduced by half on ofatumumab relative to teriflunomide (0.11 vs. 0.22; P<0.001) in ASCLEPIOS I and by more than half in ASCLEPIOS II (0.10 vs. 0.25; P<0.001). In addition, ofatumumab was associated with a 34% reduction (P=0.002) in the hazard ratio (HR) for disability worsening confirmed at three months (3mCDW) (Figure 1) and a 32% reduction for confirmed disability worsening at six months (6mCDW) (HR 0.68; P=0.01). There were also significant advantages for imaging outcomes, such as gadolinium-enhancing lesions, for ofatumumab relative to teriflunomide.

There was very little change in brain volume over the course of follow-up in either treatment arm, but ofatumumab was associated with significant protection relative to teriflunomide against new gadolinium-enhancing (Gd+T1) lesions per T1-weighted MRI scan (P<0.001) and the number of new or enlarging lesions on T2-weighted MRI per year (P<0.001) in both ASCLEPIOS I and II. The relative reduction in an axonal damage biomarker called serum neurofilament light chain (sNfL) was also significant in both ASCLEPIOS I (P=0.01) and ASCLEPIOS II (P<0.001). The results of the ASCLEPIOS trials led the US FDA to approve ofatumumab for the treatment of RMS, including clinically isolated syndrome.

In the treatment-naïve subgroup of the ASCLEPIOS trial, the advantages of ofatumumab over teriflunomide were similar or greater. This subgroup of 615 patients represented 32.7%, or nearly one third, of the 1882 patients randomized in the combined ASCLEPIOS I and II trials. Of the combined ASCLEPIOS populations, slightly fewer than 6% had secondary progressive MS (SPMS) and the remainder had relapsing-remitting MS (RRMS). To be included in the treatment-naïve subgroup, patients had to have RMS diagnosed within three years of trial screening and no prior exposure to a disease-modifying therapy.

According to Dr. Hauser, who presented the subgroup data at the 2020 ACTRIMS-ECTRIMS meeting, the randomized groups in the treatment-naïve analysis were well balanced for baseline characteristics. The average time from diagnosis to study entry was approximately four months. Slightly more than half were free of Gd+T1 lesions. The average number of relapses in the 12 months prior to study entry was approximately 1.4. The average baseline Expanded Disability Status Scale (EDSS) score was 2.3.

For treatment-naïve patients, the relative ARR was reduced 50.3% (0.09 vs. 0.18; P<0.001) for those randomized to ofatumumab rather than teriflunomide. The 38% relative reduction (P=0.65) in 3mCDW, although slightly greater numerically than that seen in the overall ASCLEPIOS data, just missed statistical significance in the treatment-naïve patients. The 46% reduction (P=0.044) in 6mCDW favouring ofatumumab over teriflunomide also exceeded the protection achieved in the published pooled analysis, and this difference did reach significance.

In addition, ofatumumab was more effective for achieving the three-point outcome of no evidence of disease activity (NEDA-3) at all timepoints evaluated. NEDA-3 is reached when there is an absence of relapses, disability worsening, and MRI activity over a given period. In the first year after randomization, the odds ratio for achieving NEDA-3 were more than three times higher for ofatumumab relative to teriflunomide (P<0.001). They were more than 14 times higher between months 12 and 24 (P<0.001). The advantage remained significant at month 24 (Figure 2).

The efficacy advantages of ofatumumab over teriflunomide in the overall ASCLEPIOS population as well as in the treatment-naïve subgroup was achieved without an apparent cost in safety, according to Dr. Hauser. Summarizing the safety data, he said in his ACTRIMS-ECTRIMS presentation, “the incidence of adverse events was balanced between treatment groups and consistent with rates seen in the overall ASCLEPIOS populations.”

The exception was an imbalance of injection-site reactions at trial initiation. However, greater rate of reactions among those randomized to ofatumumab relative to teriflunomide did not persist after the first injection. Overall, the rate of serious adverse events was slightly higher on ofatumumab than teriflunomide in both the overall population (9.1% vs. 7.9%) and in the treatment-naïve subgroup (7.0% vs. 5.3%) but there was no consistent trend for greater risk of any specific adverse events, such as nasopharnyngitis, upper respiratory infection, headache, or fatigue for ofatumumab relative to teriflunomide.

“[In this treatment-naïve population,] the incidence of adverse events was balanced between treatment groups and consistent with rates seen in the overall ASCLEPIOS populations.”

In the treatment-naïve subgroup, the compliance to ofatumumab over the course of the trial was similar to that observed in the total ASCLEPIOS population (98.8% vs. 98.3%). After the fourth injection, more than 70% of patients injected themselves for the remainder of the study.

B-cell targeted therapies already have established efficacy in MS. For example, ocrelizumab, which also targets CD20 to reduce B cell activity, is another highly-active treatment that has been approved for primary progressive and other forms of relapsing MS, but ofatumumab, unlike ocrelizumab, does not require intravenous (IV) administration. Rather, ofatumumab “is the first high-efficacy injectable disease-modifying therapy that can be self-administered at home,” Dr. Hauser said when delivering the treatment-naïve substudy data. Overall, the data he presented in newly-diagnosed treatment-naïve patients support the early use of a highly-active therapy to slow progression of RMS.

Another substudy of the ASCLEPIOS data presented at the 2020 ACTRIMS-ECTRIMS meeting looked specifically at sNfL, a biomarker for neuroaxonal damage relevant to MS and other neurodegenerative diseases. The reduction in serum concentrations of sNfL were included among the ASCLEPIOS results in The New England Journal of Medicine, but the objective of the newly-presented substudy data were to evaluate the prognostic value of elevated sNfL levels particularly in the treatment-naïve ASCLEPIOS population.

Independent of treatment arm, the substudy demonstrated that baseline sNfL levels are prognostic for lesion formation and brain volume loss over the course of the study, according to the first author,
Dr. Jens Kuhle, Neurologic Clinic and Policlinic, University Hospital, Basel, Switzerland, who presented these data (2020 ACTRIMS-ECTRIMS, abstract P0033).

Based on these analyses, “sNfL levels prospectively inform of the risk of ongoing and future disease activity and subclinical worsening in RMS,” he said in his presentation of these data. He suggested this biomarker “might complement clinical and imaging assessments” of disease progression and benefit from treatment.

In this substudy, patients with low and high baseline sNfL levels were compared. Low sNfL was defined as equal to or less than the median level of 9.3 pg/mL. High sNfL was defined as greater than 9.3 pg/mL. Comparisons were made in the total population as well as in those in the newly-diagnosed treatment-naïve subgroup.

Whether assigned to ofatumumab or teriflunomide and whether treatment experienced or newly diagnosed and treatment-naïve, a high baseline sNfL relative to a low baseline sNfL correlated with greater disease activity on imaging. For example, the risk of new or enlarging T2 lesions was about twice as great for those with high versus low baseline sNfL.

When treatment groups were compared, the risk of new or enlarging T2 lesions over the course of the study was greater for those randomized to teriflunomide than ofatumumab whether baseline sNfL levels were low or high. This is consistent with the lower protective effect of the immunomodulator relative to the monoclonal antibody. However, those with high baseline sNfL levels had a larger relative increase in risk of T2 lesions when compared to those with low sNfL lesions independent of treatment assignment whether evaluated in all patients or in the subgroup of newly-diagnosed, treatment-naïve patients.

For clinical endpoints, such as ARR and 3mCDW, rates were also generally higher for those with high relative to low sNfL, although these differences did not reach statistical significance.

Protection from Progression Independent of sNfL

Overall, a higher sNfL at baseline was found to predict higher disease activity by imaging than lower sNfL levels. Despite the value of sNfL for predicting this activity, ofatumumab was more effective than teriflunomide for most outcomes. Studies are now needed to evaluate the clinical value of serial sNfL measurements for tracking disease and whether adjustments in treatment based on sNfL improve outcome. If so, sNfL has the potential to add information about prognosis, disease status, and response to therapy.

Overall, the protection of ofatumumab relative to teriflunomide in patients with both low or high sNfL levels is consistent with the clinical findings of the ASCLEPIOS trials whether assessing the overall population or the treatment-naïve subgroup.

Subgroup data in treatment-naïve RMS patients from the phase 3 ASCLEPIOS I and II trials indicate that a highly-active targeted monoclonal antibody improves outcomes relative to an immunomodulatory therapy in first-line treatment of RMS. The principle that early use of the most effective therapy results in lower rates of progression whether measured clinically or by imaging of brain activity potentially alters the treatment paradigm. In the ASCLEPIOS trial, the safety and tolerability of the targeted therapy, ofatumumab, was comparable to the immunomodulatory comparator, teriflunomide. Compliance with the monthly self-injected targeted therapy exceeded 98%.