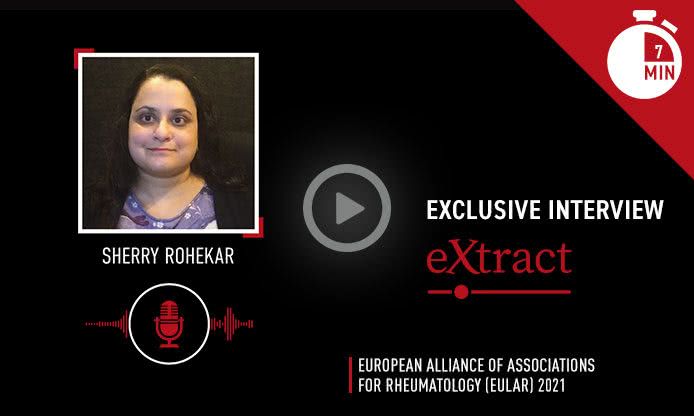 The new data presented at EULAR add important information to that provided by the recently published 24-week data from the SELECT-PsA 1 trial (McInnes I et al. N Engl J Med 2021;384:1227-1239). In that study, only the 30-mg dose of the new generation JAK inhibitor upadacitinib was associated with a significant advantage over the biologic adalimumab for the primary endpoint of ≥20% reduction in number of tender and swollen joints and ≥20% improvement in at least three of five other domains by American College of Rheumatology (ACR20) criteria. The numerical advantage of the 15-mg dose did not reach significance.

For an exclusive interview with Dr. Sherry Rohekar on the impact to clinical practice, click here

Data presented here show that by 56 weeks, the efficacy of the 15-mg dose of upadacitinib for the primary endpoint and most other efficacy endpoints was similar in both the SELECT-PsA 1 trial, which is the trial that enrolled patients naïve to biologics, as well as in the SELECT-PsA 2 trial, which was the trial for biologic-experienced patients. The data from the SELECT trials program recently led Health Canada to grant an indication to upadacitinib for the treatment of PsA.

Rates of Control Unchanged at Week 56

When evaluated at 56 weeks, placebo patients switched to active therapy had achieved rates of control similar to those originally randomized to upadacitinib. In those initiated on upadacitinib, there was no loss of efficacy observed relative to the 24-week analysis, according to Dr. Iain McInnes, Director of the Institute of Infection, Immunity, and Inflammation, University of Glasgow, UK. Rather, he described the control at 56 weeks as “generally similar” to that observed at 24 weeks overall, although the gradual improvement in response among those randomized to the 15-mg upadacitinib arm closed the modest gap in efficacy previously observed between the two active-treatment groups.

While Dr. McInnes was referring to findings from SELECT-PsA 1, for which he served as the principal investigator, the summary could also be applied to SELECT-PsA 2.

In the biologic-experienced patients enrolled in SELECT-PsA 2, persistent control was observed even for the more rigorous outcomes, such as ACR50 or ACR70 responses. For these endpoints and the primary outcome of ACR20, the rates of control at 56 weeks were about the same as those at weeks 24 or 36. For the endpoint of minimal disease activity (MDA), benefit in the 15-mg group had caught up to that of the 30-mg arm by week 56 (Figure 1).

In SELECT-PsA 1, 1,704 patients with PsA naïve to biologics were randomized to one of four arms. In three arms, patients received daily doses of 15-mg upadacitinib, 30-mg upadacitinib, or placebo. In the fourth, a subcutaneous dose of 40-mg adalimumab was administered every two weeks. For the primary endpoint of ACR20 at 12 weeks, the responses on the 15- and 30-mg doses of upadacitinib were 70.6% and 78.5%, respectively. In the placebo arm, 36.3% met this endpoint (P<0.001 relative to either upadacitinib dose). The response was 65.0% on adalimumab.

In the week 56 data presented at the EULAR Congress, the efficacy differences observed at 24 weeks, including the advantage over adalimumab, were sustained or improved. For MDA, for example, the response rates at week 24 were 36.6% vs. 45.4% for the 15-mg and 30-mg doses of upadacitinib, respectively. At week 56, these were 44.8% vs. 47.3%, respectively.

Despite a more challenging population of biologic-experienced patients, the extended outcomes at week 56 in the SELECT-PsA 2 trial were similar to the previously published 24-week results (Mease P.J. Ann Rheum Dis 2021;80:312-320). In this study, 644 patients were randomized to 15-mg upadacitinib, 30-mg upadacitinib, or placebo. More than 25% had failed two or more prior biologic therapies.

“As a result of the improvements observed for the upadacitinib 15-mg dose, outcomes in this arm were similar or approaching those observed in the 30-mg dose arm by the end of the extended follow-up,” reported the principal investigator of SELECT-PsA 2, Dr. Philip J. Mease, Director of Rheumatology Research, Swedish Medical Center, Seattle, Washington.

“Outcomes in those on the 15-mg arm were similar or approaching those observed in the 30-mg dose arm by the end of the extended follow-up.”

Whether patients had a prior inadequate response to one or multiple biologics with different mechanisms of action, a stratification of response within the biologic-experienced patients at week 56 showed a consistent benefit from upadacitinib across clinical manifestations, including musculoskeletal symptoms, psoriasis, physical function, or fatigue, according to a subanalysis of SELECT-PsA 2 data presented separately at EULAR by Dr. Mease. Specifically, this was observed whether patients had received a prior TNF inhibitor, an IL-17 inhibitor, or both.

For example, when comprehensive disease control was assessed with MDA, an endpoint that incorporates components of joint disease, skin disease, pain, and quality of life measures, disease control evaluated by number or type of prior biologic exposure “was generally comparable for either dose of upadacitinib,” Dr. Mease reported.

The safety of upadacitinib over extended treatment was evaluated in detail in both the SELECT-PsA 1 and SELECT-PsA 2 studies. There were no new or unexpected safety signals, but the long-term follow-up confirmed the previous observation that the 15-mg dose of upadacitinib is generally better tolerated and is associated with fewer adverse events than the 30-mg dose.

In SELECT-PsA 1, the rates of treatment-associated adverse events and serious adverse events, including serious infections, occurred at comparable rates in the 15-mg upadacitinib and adalimumab treatment arms. The exception was herpes zoster, which was more frequent on upadacitinib. When the 30-mg dose was compared to either the 15-mg dose of upadacitinib or adalimumab, infections overall, herpes zoster specifically, and serious infections occurred more commonly on the higher dose even if differences were modest. Adjudicated rates of cardiovascular (CV) events, venous thromboembolic events, and malignancy rates were not different between any study arm.

In SELECT-PsA 2, which did not have an active comparator arm, the rates of several types of treatment-emergent adverse events were numerically higher on the 30-mg versus the 15-mg dose of upadacitinib, although absolute differences were generally modest. This included higher rates of herpes zoster (8.5% vs. 3.8%), serious infections (6.1% vs. 2.6%), and evidence of hepatic dysfunction such as elevated liver enzymes (17.7% vs. 4.8%). Exposure-adjusted event rates of hematologic disturbances per 100 patient years, such as neutropenia (3.1 vs. 1.0), anemia (5.4 vs. 2.1) and lymphopenia (2.4 vs. 0.7) were low in both groups but more common on the 30-mg dose. As in SELECT-PsA 1, there was no pattern suggesting increased risk of CV or thromboembolic events or malignancy.

In a separate analysis, safety data from the two trials were integrated in an independent EULAR presentation by Dr. Gerd Burmester, Director, Department of Rheumatology and Clinical Immunology, Charité Hospital, Humboldt University, Berlin, Germany. The conclusions from this larger data pool were similar. The 30-mg dose of upadacitinib was found to be generally accompanied by a modestly increased risk of adverse events when compared to the lower dose. The safety profiles of the 15-mg dose of upadacitinib and adalimumab were characterized as similar, although herpes zoster was observed more commonly on upadacitinib.

There were 2257 patients included in this larger safety analysis, allowing a more detailed examination of specific side effects. In the case of herpes zoster, for example, Dr. Burmester reported that most of these infections involved a single dermatome. No case of herpes zoster so far has involved the central nervous system or internal organs. Adverse events involving the hepatic system have been “mostly transient, non-serious increases in transaminases,” he said. Evidence of hematologic disturbances, such as neutropenia or lymphopenia, “were generally mild or moderate and non-serious.”

Biologic therapies have been a major advance in the treatment of PsA, but targeted alternatives have helped expand the options for patients without an adequate response to conventional DMARDs. Newer oral agents have an obvious role for patients who are not candidates for injectable therapies or prefer to take medications orally. So far, upadacitinib is the only targeted agent in PsA to show efficacy that exceeds that of a TNF inhibitor.

The extended data from two phase 3 trials with upadacitinib in PsA have shown persistent efficacy out to 56 weeks with no new safety signals. The long-term data from these two trials, SELECT-PsA 1 and SELECT-PsA 2 demonstrated a catch up phenomenon in which the better tolerated lower dose of 15 mg had caught or nearly caught the 30 mg for most efficacy endpoints at the end of 56 weeks. Upadacitinib 15-mg is now approved in Canada for the treatment of PsA. The availability of a new effective oral agent is expected to be helpful in the control of a disease for which more treatment options are needed.