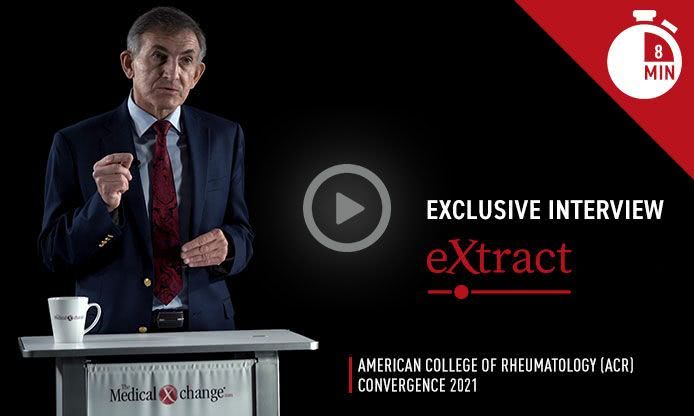 At the 2021 ACR Convergence meeting, the newest data on JAK inhibitors included a randomized trial that associated tofacitinib with substantial attenuation of spinal vertebral inflammation. These data are consistent with and build upon the clinical benefits associated with tofacitinib in a phase 3 trial published earlier this year (Deodhar A et al., Ann Rheum Dis 2021;80:1004-1013). For upadacitinib, a 2-year extension of the previously-published data from the SELECT-AXIS 1 trial (van der Heijde D et al. Lancet 2019;394:2108-2117), confirmed persistent benefit in the primary and secondary endpoints, a low rate of radiographic progression, and a long-term safety profile similar to that of the blinded trial.

For an exclusive interview with Dr. Walter P. Maksymowych on the impact to clinical practice, click here

“JAK inhibitors have been approved or are being evaluated for many of the immune-mediated inflammatory joint diseases, including AS,” reported Dr. Atul Deodhar, Medical Director, Rheumatology Clinics for the Division of Arthritis and Rheumatic Disease, Oregon Health Sciences University, Portland. Dr. Deodhar, who presented the extension data from the upadacitinib study in AS, has also served as a lead investigator in the tofacitinib studies. He noted that both of these drugs “have demonstrated significant improvement in disease activity, function, and imaging outcomes” in the pivotal multicenter trials behind applications for approval.

“JAK inhibitors have been approved or are being evaluated for many of the immune-mediated inflammatory joint diseases, including AS.”

In the phase 3 tofacitinib trial Dr. Deodhar presented at last year’s ACR Convergence meeting and subsequently published in 2021, 269 patients who had failed nonsteroidal anti-inflammatory drugs (NSAIDs) but were naïve to biologics were randomized to tofacitinib or placebo. At 16 weeks, the proportion of patients with ≥40% improvement in the Assessment of SpondyloArthritis international Society criteria (ASAS40) was 3-fold greater among patients randomized to the JAK inhibitor than placebo (40.6% vs. 12.5%; P<0.0001).

No Loss of Response Over 104 Weeks

In the extended results of the phase 2/3 SELECT-AXIS 1 trial that Dr. Deodhar presented at this year’s ACR Convergence meeting, the proportion of patients with an ASAS40 response on upadacitinib at 14 weeks did not just persist after the blinded 16-week study period was completed but continued to increase through the 104 weeks of follow-up (Figure 1).

“Over 2 years, the improvement on the ASAS40 primary endpoint was consistent with no loss of response, and there were no new safety concerns relative to the 16-week results,” Dr. Deodhar reported.

The JAK Family and Vertebral Inflammation in AS

The JAK family of intracellular tyrosine kinases, which are JAK1, JAK2, JAK3, and TYK2, are signal transducers for a broad array of pro-inflammatory cytokines, including those implicated specifically in AS, such as interleukin-12 (IL-12) and IL-23. Relative inhibition on different members of the JAK family are likely to differentiate JAK inhibitors for specific risks and benefits, the downregulation of inflammatory signalling with agents in late stages of development have not only been associated with symptom control but a reduction in radiographic progression of AS.

“Over 2 years, the improvement on the ASAS40 primary endpoint was consistent with no loss of response, and there were no new safety concerns relative to the 16-week results.”

Also presented at the meeting,, one study showing the favourable impact of JAK inhibition on vertebral inflammation was conducted with the Canada-Denmark (CANDEN) MRI Scoring System. In a study that randomized 137 biologic-naïve AS patients to one of two twice-daily doses of tofacitinib (5 mg or 10 mg) or placebo, reductions in the vertebral body inflammation subscore were highly significant after 12 weeks for both doses of tofacitinib relative to placebo. The reductions in several other measures of inflammation of the spine and facet joints for tofacitinib relative to placebo, including posterolateral inflammation, were also highly significant (Figure 2).

“The CANDEN MRI scoring system was developed to provide a detailed anatomy-based evaluation of inflammatory and structural lesions in spinal vertebral bodies and posterior elements in patients with AS,” explained Dr. Mikkel Østergaard, Chairperson, Copenhagen Center for Arthritis Research, Denmark. He said that reduction in inflammation on imaging at 12 weeks is consistent with JAK inhibition seen clinically and experimentally.

Inflammation Downregulated in the Spine

“Tofacitinib reduced inflammation in the posterolateral elements of the spine and the facet joints, which has not been described previously,” Dr. Østergaard said.

“[There was] reduced inflammation in the posterolateral elements of the spine and the facet joints, which has not been described previously.”

Control of back pain was one of the outcomes evaluated in the long-term extension of the SELECT-AXIS 1 study with upadacitinib. After the initial 16-week blinded trial when placebo patients were switched to upadacitinib, back pain symptom scores continued to fall in the upadacitinib group for at least four more months before plateauing and were then maintained for the remainder of the 104-week study. Among those initially randomized to placebo, there was a steep decline in back pain after the switch to upadacitinib. Within about 2 months after the extension trial began, back pain control was similar in the two groups (Figure 3).

The long-term follow-up of the SELECT-AXIS 1 trial also included imaging assessments. Using the Spondyloarthritis Research Consortium of Canada (SPARCC) spine and sacroiliac joint scoring to assess change in MRI images, the substantial mean change reductions from baseline at week 14 were sustained at week 104. For those switched from placebo to upadacitinib at week 16, the reductions from baseline at week 104 were about the same as those achieved in the group on continuous upadacitinib (Figure 4).

Safety and Efficacy Data at 104 Available

In the SELECT-AXIS 1 trial, 187 patients were initially randomized to 15 mg of once-daily upadacitinib or placebo. By week 104, 144 (77%) were still in the trial and available for efficacy and safety analyses. The clinical measures of response over the course of the trial followed the same pattern. Much like the ASAS40 response, there continued to be clinical gain on multiple endpoints after the blinded trial was completed, including a low activity score (<2.1) by Ankylosing Spondylitis Disease Score (ASDAS) criteria and the ASDAS inactive disease (ASDAS ID) score of <1.3.

Both tofacitinib and upadacitinib have been well-tolerated in the large multicenter placebo-controlled trials. In the tofacitinib phase 3 trial led by Dr. Deodhar, the overall rates of adverse events at 16 weeks were about the same in the active treatment and placebo groups. After 48 weeks of follow-up, three patients had hepatic events, but none were thought to be treatment-related. Similarly, a case of meningitis was also not considered treatment-related. The incidence of herpes zoster, which has been repeatedly associated with JAK inhibitors in clinical trials, was 2.3% in the tofacitinib group. There were no cases of psoriasis or inflammatory bowel disease (IBD) considered treatment-related. Two cases of uveitis were identified, but both patients had a history of uveitis. No cases of malignancy, major adverse cardiovascular events (MACE), venous thromboembolism (VTE) or interstitial lung disease were observed.

“The lowest back pain scores reached were generally maintained for the remainder of the 104-week (SELECT-AXIS 1) study.”

At the end of 104 weeks of follow-up in the SELECT-AXIS 1 trial, there were no serious infections or cases of MACE, lymphoma, non-melanoma skin cancer, renal dysfunction, or gastrointestinal perforation observed in patients receiving upadacitinib. Herpes zoster infections occurred in 2.7%. There were cases of uveitis, but most occurred in patients with a history of uveitis. Single cases of VTE and IBD over follow-up made their relationship with treatment uncertain.

The safety data from the tofacitinib and upadacitinib trials in AS are consistent with the much larger and longer experience with these drugs in other conditions. For example, a pooled analysis that included more than 3000 patients with rheumatoid arthritis (RA), nearly 1000 patients with psoriatic arthritis (PsA), and 182 patients with AS was presented by Dr. Gerd Burmester, Director, Department of Rheumatology and Clinical Immunology, Charité Hospital, Berlin, Germany, at the 2021 ACR Convergence meeting.

In this analysis, the safety of those randomized to upadacitinib was compared to those randomized to methotrexate or adalimumab on an exposure-adjusted basis. Again, herpes zoster infections in this analysis, as in numerous other clinical studies, were more common on the JAK inhibitor, but adverse event rates, including those involving MACE, VTE, and upper respiratory infections, were similar.

“The rates of herpes zoster are low but significantly higher on JAK inhibitors than other therapies commonly used for inflammatory joint diseases,” reported Dr. Burmester, who suggested that a herpes zoster vaccination prior to JAK inhibitor treatment would be expected to reduce or eliminate this risk. He expects the safety profile to be comparable for AS if JAK inhibitors are approved as expected.

Alternatives to Biologics for AS Are Needed

There is a need for alternatives to biologics, which include IL-17 inhibitors as well as TNFi, in moderate-to-severe AS. The biologics are highly effective, but there is a substantial minority of patients who do not achieve an adequate response, while many patients lose response over time. Relative to biologics, JAK inhibitors offer an oral option, which is a potential advantage for patients who wish to avoid or cannot tolerate injectable drugs. The high rates of efficacy observed with JAK inhibitors in clinical trials suggest that they might compete with biologics as first-line options for patients who cannot be controlled on NSAIDs or DMARDs.

In RA, direct comparisons have suggested that JAK inhibitors have at least equal potency to TNFi. In a placebo-controlled head-to-head comparison of tofacitinib and adalimumab in RA, the primary endpoint of ACR20 was reached by 52.6% and 47.2% of those randomized to tofacitinib and adalimumab, respectively. The difference relative to placebo (28%; P<0.001) was highly significant (van Vollenhoven RF et al. N Engl J Med 2012;367:508-519). A numerical but not statistical advantage for tofacitinib relative to adalimumab was also seen for relative improvement in the Health Assessment Questionnaire-Disability Index (HAQ-DI) and the Disease Activity Score for 28 joints based on erythrocyte sedimentation rate (DAS28-ESR).

In a similar trial conducted with upadacitinib, both the JAK inhibitor and adalimumab were again superior to placebo for the ACR20 endpoint at 12 weeks (P<0.001), but there was a significant advantage for upadacitinib relative to adalimumab for ACR50, DAS28-CRP≤3,2, and reduction in pain severity (Fleischmann R et al. Arthritis Rheumatol 2019;71:1788-1800). On a background of methotrexate, only upadacitinib was superior to placebo for reducing radiographic progression.

Based on data presented at the 2021 ACR Convergence meeting, regulatory approval of JAK inhibitors for the treatment of AS appears to be imminent. The published phase 3 trials with both tofacitinib and upadacitinib have demonstrated a favourable benefit-to-risk profile, while more recently presented data have confirmed sustained safety and efficacy. These include imaging studies confirming reduction in spinal inflammation consistent with improvement in back pain. Given the limitations of biologics for AS, including loss of response over time, JAK inhibitors appear to provide an important alternative if they are approved as expected.