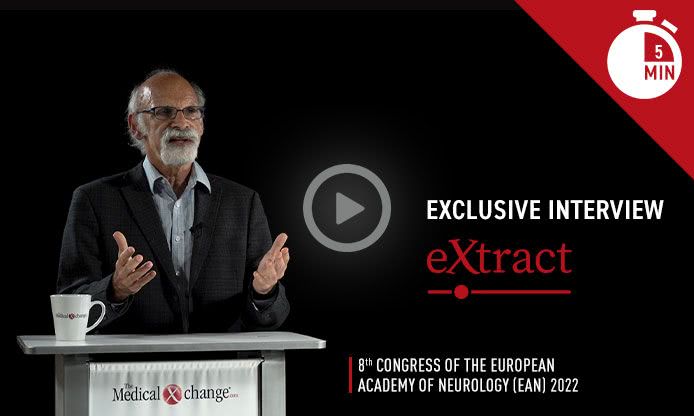 SPMS, which develops in most patients after RRMS, is characterized by worsening neurologic function independent—and often in the absence—of relapse activity. Rather than a reduction in the frequency and severity of relapse, the benefit of therapies for SPMS is derived directly from protection against disability.

For an exclusive interview with Dr. Daniel Selchen on the impact to clinical practice, click here

The most recent follow-up from the pivotal placebo-controlled EXPAND study assessed siponimod, a selective S1P receptor modulator, indicated for the treatment of patients with SPMS. Data showed that the projected risk reduction for wheelchair dependence at 10 years reached 50%. Parallel protection against cognitive loss substantiates a change in the trajectory toward disability.

Previously, a post-hoc analysis reported 3 years ago from the same trial also showed protection from wheelchair dependence, defined as an Expanded Disability Status Scale (EDSS) score of ≥7.0. The estimated hazard ratio (HR) for wheelchair dependence for those randomized to siponimod rather than placebo corresponded with a 28% risk reduction (HR 0.72; 95% CI 0.48 – 1.06), which fell just short of statistical significance. At that time, a 36% risk reduction (HR 0.64) in a subgroup of patients who entered the EXPAND trial with a baseline EDSS of 6.5 did reach significance (P=0.0483). Under model assumptions for treatment preservation, siponimod delayed the median time to reaching an EDSS score of ≥7.0 by 4.3 years.

Up to 50% Reduction in Wheelchair Dependence

However, with longer data to track the trajectory of disabilities more accurately, relative protection is proving greater than previously reported.

This analysis drew on the 3 years of blinded data in the EXPAND trial, called the core part, with further data collected in 6 years of open-label follow-up in the extension part. Observed data extrapolated beyond the follow-up time of the EXPAND core part in the overall population and in the active/non-active SPMS subgroups and was based on multistate Markov model estimates.

With a reanalysis focused on those randomized to siponimod relative to the subgroup of placebo patients who were never switched to active therapy, the protection against wheelchair dependence reached 40% (HR 0.60; P=0.009) (Figure 1). For a subgroup of patients who entered the EXPAND trial with active SPMS, the protection from wheelchair dependence for those on siponimod relative to those who never received siponimod exceeded 50% (HR 0.49; P=0.005).

“This new analysis of a delay in the transition to wheelchair is a meaningful demonstration that siponimod slows down the progression of disability over long-term follow-up,” reported Dr. Patrick Vermersch, Chairman, Department of Neurology, University of Lille, France.

While placebo patients were allowed to switch to open-label siponimod at the time of 6-month confirmed disability progression (6mCDP) in the blinded study, they were not part of this analysis. Rather, the progression to EDSS ≥7.0 was tracked with a modified full analysis set (mFAS) that focused on those who did versus those who did not receive siponimod.

“Relative to no treatment, the median [time to wheelchair] was an estimated 5.8 years in the overall population and 7.9 years in the active SPMS group.”

According to these analyses, approximately 50% of untreated SPMS patients would be expected to be wheelchair dependent in under 10 years. Yet in extrapolating beyond the observed data of the EXPAND core part, siponimod significantly attenuated the rise in the proportion of patients becoming wheelchair dependent. The median time to wheelchair was an estimated 5.8 years (15.3 vs 9.4 years, P=0.013) in the overall population relative to those on placebo. In the active SPMS subgroup of patients, the expected median delay was 7.9 years for patients in the siponimod group (15.5 vs 7.6 years, P=0.015) (Figure 2A) and  (Figure 2B).

The advantage of siponimod relative to placebo, whether in the overall population or the active SPMS subgroup, began to become apparent about 12 months from randomization. By flattening the curve, the relative advantage of siponimod over no treatment was cumulative over time. As a result, there was a widening advantage showing a greater absolute difference, for example, at 10 versus 5 years.

For the goal of delaying disability, the follow-up data from EXPAND emphasizes the potential benefit of starting treatment as early as possible. This can be challenging because there is no single biomarker to track the transition from RRMS to SPMS. It is possible that a substantial proportion of patients who have already transitioned to SPMS are still being identified as having RRMS, according to MS Perspectives, an online survey of self-reported symptoms among patients with SPMS versus those with RRMS.

“In clinical practice, SPMS is usually diagnosed retrospectively,” reported the lead author of the survey, Dr. Antonios Bayas, Senior Lecturer, Department of Neurology and Clinical Neurophysiology, University Hospital Augsburg, Germany. In explaining the high rates of disability among patients identified as having RRMS, he speculated that a certain proportion were likely to have already progressed to SPMS.

Within this survey, involving more than 4,500 adult patients with MS in Germany, Dr. Bayas compared 3,151 patients with an RRMS diagnosis to 690 patients with an SPMS diagnosis. “As expected, impairment in daily activities was approximately 2-fold higher in patients considered to have SPMS relative to those diagnosed with RRMS,” Dr. Bayas said. However, a substantial proportion of RRMS patients (65.8%) reported disease progression, including disability, independent of relapse activity in the past 12 months. This was lower than the 92.9% of the SPMS patients, but higher than would be expected among patients with RRMS, and the progression included impairments, such as loss of mobility, that are more characteristic of SPMS (Figure 3).

“Especially with regard to progression independent of relapse activity, the present data at least suggest that a transition to SPMS might have already occurred but had not been recognized,” Dr. Bayas said. Given the improving treatment options for SPMS, he believes that clinicians should pay greater attention to the signs of transition, so that treatment targeted at SPMS-related disability can be initiated as early as possible.

In treating SPMS early in its course with siponimod, preservation of cognitive function is another expected benefit. In a secondary analysis of EXPAND, siponimod was associated with a significant improvement in cognitive processing speed (CPS) as measured with the Symbol Digit Modalities Test (SDMT) (Benedict RHB et al. Neurology 2021;96(3):e376-e386). Tested at 6-month intervals, the advantage of siponimod over placebo was demonstrated starting at 12 months. This advantage was shown 2 ways. Relative to placebo, patients on siponimod were significantly more likely (HR 1.28; 95% CI 1.05-1.55; P=0.0131) to have a 4-point sustained increase in SDMT score and significantly less likely (HR 0.79; 95% CI 0.65-0.96; P=0.0157) to have a 4-point sustained decrease in SDMT score. A 4-point change in SDMT is considered clinically meaningful.

Preventing or slowing cognitive impairment is important to patients, but there is also an association between cognitive impairment and physical disability, according to another set of new data presented at the 2022 EAN Congress. In this study, data were again drawn from the core blinded EXPAND trial as well as the extension part of the study that followed.

When stratified by SDMT quartiles at baseline, those with the worst CPS were at the greatest risk of wheelchair dependence at the end of the randomized trial and again at the end of the extension. Relative to those in the quartile with the best CPS, the risk of EDSS score ≥ 7.0 was nearly 2-fold greater (HR 1.81; P=0.007) (Figure 4).

“The results support the relevance of monitoring cognition in daily practice to help identify patients at risk of progression not limited to physical disability.”

“The results support the relevance of monitoring cognition in daily practice to help identify patients at risk of progression not limited to physical disability,” reported Dr. Gavin Giovannoni, Chair of Neurology, Blizard Institute, Barts and The London School of Medicine and Dentistry, UK.

Characterizing diminished cognitive function as a “silent form” of MS progression, Dr. Giovannoni also showed a correlation between loss of CPS over the course of the study—not just at baseline—and an increased risk of wheelchair dependence. Again, when those with progressive loss of cognitive function on SDMT was compared to those without progressive cognitive impairment, the increase in wheelchair dependence was nearly 2-fold greater and reached statistical significance (HR 1.73; 95% CI 1.01-2.96; P=0.046).

Recognizing the Interrelation of Physical Disability and Cognitive Function

Dr. Giovannoni believes physical disability and cognitive loss are interrelated, calling CPS “an indirect measure of network efficiency and functional brain reserve.” The benefit of siponimod on both physical and cognitive measures of SPMS disease progression over time are consistent with the premise that siponimod alters the course of SPMS.

Since the primary results of the EXPAND study were published (Kappos L et al. Lancet 2018;391:1263-1273), there have been more than a dozen publications derived from extension studies, secondary analyses, and post-hoc investigations. Of the limited number of treatment options for SPMS, siponimod is among the most well studied. Over time, this drug has continued to exert disease-modifying benefit. An oral therapy, siponimod is convenient and relatively well tolerated. In the controlled trial and extended follow-up, siponimod has been associated with increased liver enzyme levels, peripheral edema, and bradycardia, but these have generally been of mild-to-moderate severity. In the randomized trial, only 3% of patients discontinued treatment due to an adverse event.

The most recent data ‘change our world view of MS away from simply a physically disabling disease to include cognition as a key component.’

While treatments of RRMS reduce the relapse rate, which, in turn, is associated with delay in the onset of SPMS, the EXPAND trial shows that siponimod can slow the progressive disability characteristic of the SPMS phenotype. This protection extends to the most feared complications of this disease, particularly loss of mobility and diminishing cognitive function. The fact that loss of cognitive function and risk of progressing to an EDSS ≥7.0 are associated, supports the principle of offering treatment effective against both.

The most recent data “change our world view of MS away from simply a physically disabling disease to include cognition as a key component,” Dr. Giovannoni said. He believes both are important targets of disease-modifying therapy.

Relative to RRMS, which has benefited from a substantial increase in therapies over the past 10 years, effective treatments for SPMS are more limited. The promise of siponimod was established in the pivotal EXPAND study, but the extension data have shown that the treatment response is durable, treatment remains reasonably well tolerated over time, and provides protection against the most significant forms of disability, including diminished mobility and cognitive function. The data indicate the greater relative benefit might accrue from earlier recognition of the transition from RRMS to SPMS and prompt initiation of treatment.